when a family party was postponed because relatives were out of the country I didn't realize it was a pilot cousin captured in Erithrea with a sealed package containing part of a kalachnikov. It was secret. She's a PhD in computers and with a sweet and innnocent manner and it's clear she had no knowledge of what she was carrying. But tonight she's back home and the news is all over. Now I want to welcome Vered Aronson home.

It all started when he hit me back. And I won't apologize because I was right. so there.

Nice glass exhibit at the Land of Israel museum.

A sudden decision to wait for the biopsy results at the Dead Sea. Oren made reservations at the Crowne Plaza. Late last night, instead of writing something here I looked up the reviews of the hotel. Oy. I am pretty sure I've been there before because it sounds so terribly (and frightfully) familiar but never mind. So we're on our way after lunch.

I hope I can focus the camera this time.

Eat your hearts out. This is the view from my balcony. 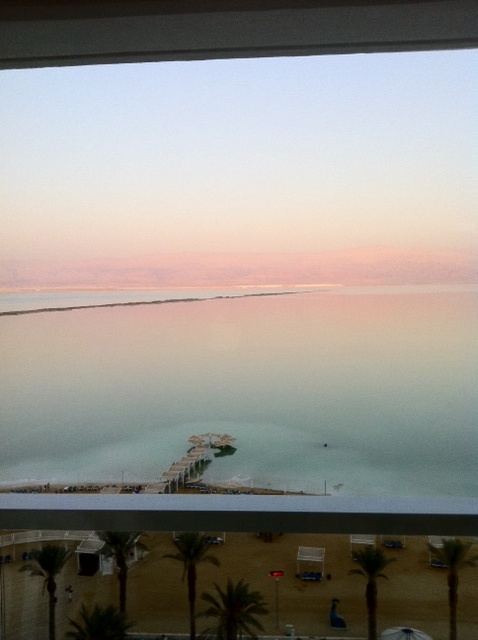 After a fantastic lunch in Herzlia with some dear friends at Patqua, we drove to the Dead Sea in 2 hours and were floating in the salt water by 5:30. The Crowne Plaza turns out to be the exact opposite of what I read on Tripadvisor. There was parking in front of the hotel, the check-in wait was brief and the staff was very polite and helpful. Our room must have cost more then the disappointed guests on the web, or we had great luck, because not only do we have adjoining rooms with the kids, but we have wine, fruit, chocolate, water and free internet. And the proximity to the sea is wonderful. The food is pretty blah but the desserts were surprisingly good, considering that they're parve. So far, so good.

So far from the world, and yet the world is here. You can see Jordan, and not only does the car radio pick up mostly Jordanian stations, but my cellphone is charging me roaming rates because I'm out of the country. Libya heads the news, but the rocket attacks from Gaza are still going on, and the only peace is inward