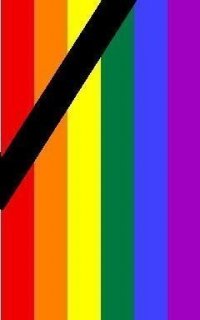 I have no idea who burst into the gay club and murdered two young people, but it is such an outrageous act that it threatens the nature of life in Tel Aviv. All Tel Aviv. The atmosphere of 'no judgement,' is the characteristic of the city.

I just did a little radio interview with Anat Dolev on Oscar Wilde which followed a little speech from her about one of the reasons for the fall of the Temple, "gratuitous hatred." And Haran Rivlin just reminded me that once you begin by hating an 'other,' such as the Palestinians, it is easy to add on other groups. This seems to be the general mood around.

The gay flags hanging from balconies on the streets in Neve Tsedek and some of the neighborhoods that I passed today warmed my heart. Maybe it wasn't even a hate crime but the city is showing just a little solidarity.

Am I the only person who goes deaf after every wedding I attend? The noise not only prevents conversation, but it slows down the food. I love weddings, but music that becomes deafening prevents celebrations.

Now that I've got my ears back, I can talk about the nostalgia of weddings. Except for the noise I love them. When I first got a tv (b+w of course) in Israel, I wrote this poem:

Confined to the couch by a bad back,
I watch Israel TV with my son.
There is an Arabic program on
and we slowly learn that the man
at the final fitting for a suit
("Mabrouk, Jamil!") and the woman
showing her new dress to her best friend
("Mabrouk, Azziza!") are getting married.
We watch the men come in to shave the groom,
the women warm the bride with dance and song,
the separate dinners with ululations.
More congratulations, then:
the two groups bring the couple to the square.
And when Azziza and Jamil look at each other --
slowly, shyly --I begin to cry.

I always cry at chasenes.

A few words on the water shortage. As I watch the little patches of green in our neighborhood grow brown, and I begin to feel sorry for us (well - me) sometimes I think of the first time I realized that our Arab neighbors in the West Bank have been rationed for years. This is a rather long poem, so you might want to brace yourself

Everything is impossible in this heat
Even the street smells as if it is rotting away
and nothing we long for will ever grow.


And I go home and shower and think
of the woman from Hebron I met on the plane
who was just like me except she
wouldn’t be able to wash away the flight
because of the water ration.
And I am not refreshed.

Everything means something in this heat
But what it means is beyond my knowledge and control,
going off in all directions, even though
I still keep my fingers crossed for Camp David.

And I stay home and turn on the air conditioning
to clear my mind and listen to news
of people who are starving themselves because
they fear their houses will be lost
and people whose houses have been
blown up and people who keep a key
half a century old to an abandoned house,
and remember the unlocked homes my family left
(a whole village of houses)
and my brother and I as the only survivors
don’t even want to know about them
much less go about seeking reparations
and my heart goes out
to each person with a key and no door.

Everything gets mixed up in this heat. I keep
looking for the little key I promised
to make copies of for everyone in the office
and remember I told you, ‘Watch, I’m putting it here,
so everything will be clear, and now I can’t remember
where it was I was sure it would be safe—

And I might as well add the other one about 'others' i wrote around the same time.

For thirteen hours I sit next to a man
who will not exchange a word with me.
I watch him mostly sidelong, sometimes full face,
as he downs his vodkas before unwrapping the shining
glatt-kosher tray – sometimes dinners,
sometimes breakfasts, always meals parallel to those
the airlines provides the rest of us.
It is not that I am a woman – I saw him flirt
with the blond French girl whose seat he wanted
so he could sit thus apart from the others,
He will not speak because I am so obviously
an apicourus, the Hebrew newspaper and book
of Oscar Wilde on the seat that separates us
showing the real separation.

And so, given up for lost, I have my freedom,
can unhook my bra and read my Wilde as if
he too does not exist.

All my old friends in the States are into religion.
It is their new salvation – even the most worldly
slip into midrashim when we discuss other issues.
They use Yiddish words from the ghetto I haven’t heard
since I was a child, but with a postmodern twist – take
frum for instance. “Ah, is he righteous!” My mother would
say, delineating the man who simply followed the rules
from the intensely devout, “A truly frum Jew.” Since we were all
frum – there was no alternative but the degrees of devotion.
Now it sets the Jew apart by dress, a stubborn discovery
of ritual identity, frum with quotation marks. Or so they tell me.
What do I know? I am so far away, an Israeli
who has even picked up a bit of an accent
into her twenty-two years away from the diaspora,
who slips into Hebrew unwillingly when someone asks
about whether there were familiar names
on the list of the dead in the Tel Aviv bus-bombing,
and shakes her head and cannot even give an opinion
about what Israel should do. “My son is in the air force,”
I mumble, “I live there.”

“You come from an observant family,”
a friend’s friend asks in wonderment,
“When did you stop keeping kosher?”
“When I had to make deals with the Rabbinate
in order to get divorced.”

Every portion of our lives was interspersed
with the desire for righteousness – a piece of cake, lekach, offered
with the reminder of God’s words in the prayers,
“for it is a good lesson, lekach, I have given you.”
“Here is a wing – you should fly to Heder”
How I loved the wholeness of it – everything meaning something greater –
how limiting it became when reduced to ritual.

How fine to be wrapped in a prayer shawl,
surrounded by holiness, making a whole world
— just you and God--- in a portable tent.

Every flight I take to Israel is one of reordering,
a renewed – sometimes reluctant – commitment to a place.
Before I left New York today my daughter asked me to explain
the meaning of the word “home,” in the film she is making.
“Home,” said the other woman she interviewed, “is a place
I can defend with a gun.” “I don’t like homes that keep
others out,” I tell my child, “and I can’t be at home
when there are homeless.” (Both of us recall, suddenly,
our penchant for passing out quarters in the street – a weakness
we are both embarrassed about. We say nothing.)
Then, when she asked me about feminism,
I reminded her of something she once said
that I stole and incorporated in a poem:
“Women belong
in the same jobs as men,”
she retorts when the Rabbi on TV
calls for a demobilization of all women
from the army. Then “Men belong
in the same jobs as women,
in their homes, in the kitchen,
in safe places
away from the borders.”

Righteousness should not depend
upon keeping me out, I think
to the old man sitting next to me,
on looking up surreptitiously
at the in-flight movie,
and cursing the corruption
of the corrupt masses.
~~~~~~~~~~~~~~~~~~

The death of Amos Kenan, although long expected, is greatly felt. All day long - flashes of meetings with him, pages from his books and columns, tv interviews, snippet of gossip - keep coming back to me. He was a man who thought deeply and emotionally, and there are few profound and direct thinkers like him around nowadays.