A little announcement in Hebrew:

A shower of rockets in the north. i call my ex-mother-in-law who went back to Haifa the other day because i know she can't make it to the shelter and i see that at least one rocket fell very near her house. "I'm fine," she says, "I just stand here in the hall." Is she deaf? I hear the siren in the background. Go downstairs! I tell her. "I'm fine here." She's 91.

I don't know this guy, Robert Spencer but I do know that his proposal here, that Kfar Kanna was staged, is one i have heard of numerous other events in this area. Many have been proved, such as Jenin. When you see two guys carrying a body, and then the 'body' falls off, and gets up and gets back on the stretcher, you can see something is wrong. But I was also getting antithetical reports from soldiers in the field there, and hearing the opposite on CNN.

I know that the temple was destroyed because of irrelevant hatred, so i provide here a quote from the past:
In a recent interview, General Norman Schwartzkopf was asked if he thought there was room for forgiveness toward Hizbollah
The General said,
" I believe that forgiving Hizbollah is God's function. The Israeli's job is to arrange the meeting."


You know what? It isn't funny. We keep getting citizens killed. 6 people today - 3 guys from Tarshicha. 3 from Akko. 2 Soldiers. This day is just too hard to take. The sites are pretty hard to look at too - a friend witnessed a body and said that anti-personnel rockets just dismantle bodies. Now the total of citizens is 8 dead.

And while this is happening I was at meetings in Tel Aviv, at a cafe on Dizengoff Street, getting the same answer from everyone I asked "How are you?": "Fine, considering the circumstances." and then followed by "for the moment." 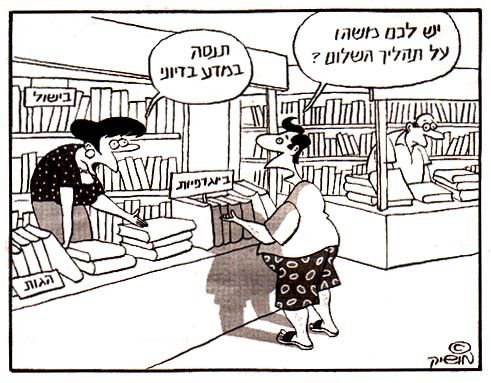 "do you have anything on the peace process?" "take a look in science fiction"

Let's take the UN peacekeeping forces,for example. I have said in these pages that the whole of Sinai is a weapons storage. This is under the watchful gaze of the UN and will be a 'problem' in the future. Here's another story about the UN: The Volokh Conspiracy

So how can we have an international peacekeeping force?

And how can all those people who slept with rockets (meant for me) in their homes all those years return to their towns? The practical dilemma is too much for me, and the only guideline I can think of to the moral solution is that it is immoral to commit suicide.

Not all my friends think this. I've been getting lots of invitations to anti-war demonstrations - and they are very tempting. Israelis have an obligation to urge the government to do everything possible to achieve peace..

What a strange residents meeting we just had - determining to fix as little of our building as possible right now. We'll wait until spring to plant a garden, we vote. Only one person whispered under her breath something about the rocket we were all thinking about that would be doing our remodeling for us.

Ezi and I are having breakfast,he is reading out to me all kinds of theoretical analyses about the military situation and I have just read Sayyed Kashua and am looking around on the shelves. And suddenly I blurt out - what we have to worried about right now is surviving. We don't have any power in making all those stupid plans - we just have the power to store batteries, candles, oil, rice, sugar! He looks at me blankly.

Naim Araidi from Maghrar, of whom I have written many times, reports about the state of his village after having suffered the second death in this war today. Naim may be one of the coolest people I've ever known - how he arrived in Washington from Israel one night, without socks, and without skipping a beat, appeared with me at the Kennedy Center the next day! And now, even he is in a state. There are no shelters in Arab villages - only recently have the building rules been altered to require security rooms - and so there is no where to go. The number of Arab victims in the past weeks has been totally disproportional. It is not only that Israel never thought of Arab or Druze villages being bombed, but also that they do not have as many opportunities to be hosted in the center of Israel. This is a terrible situation and we are going to have to learn as we go along to deal with it - but in the mean time people are being killed.

And just to show you something of these places amd people bombed today, here's the audience of the poetry festival in Maghrar 3 months ago, and the view of ein al assad, and a restaurant in majdel champs. 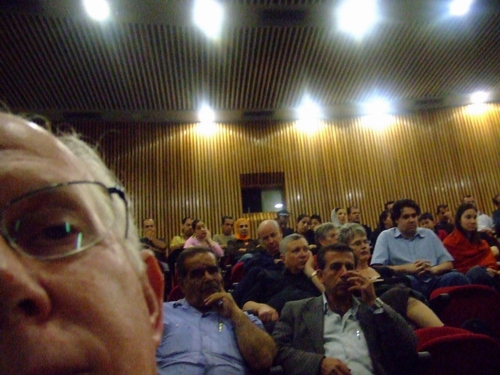 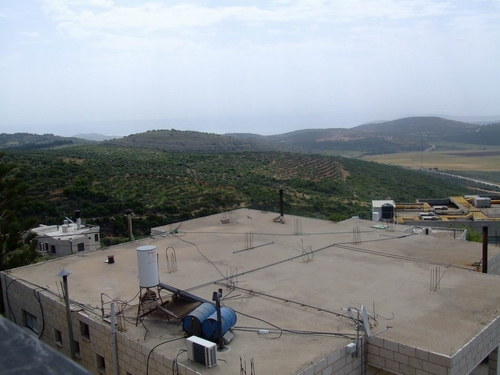 Yes, they get closer and closer. Hadera now.

Want to help? Give to American Magen David Adom. We're having a hard time taking physical care of all the wounded civilians.

Another day of disaster. Three more Arab women killed. This time Bedouin. A mother and two daughter. They were in their home. But there are no alarms in Arab villages. This is the third reason the Arab casualties are so high. Not that I think it would have helped in these cases because all the women in the past two days were in their homes, and the rockets rammed right into those houses.

Me I am working on preventing a rocket attack on my place by painting the bedroom furniture. I figure that if my house is very neat there will be more divine respect for its integrity. Don't you agree?

A lot of my friends from abroad have been asking what they could do to help - i've posted a few sites, and you probably have seen more, but if you can write or call everyone you know in Israel, and try to make them feel a little better, it would be very nice. If you know people in Lebanon, get in touch too.

And donate to Magen David.in the U.S. or England