Gotta go donate blood. I'm O- and they're in need what with all the injured in the terrorist attack down south.

I just hope this isn't the beginning of a war. I've been complaining about armed Sinai for at least 6 years, november 2005,

But I'm only an O- poet, so we never got around to building a wall.

Later that evening: This is very embarassing - not only is it clear that more blood will be needed, but I had my stupid eyebrows tattooed two months ago and have been rejected by the magen david adom. The only good thing I could do at this point was to donate blood, and even that is not going to happen.

i don't get it - 8 people killed the other day, more yesterday, 30 rockets fired on our towns - and egypt withdraws her ambassador. This makes sense only if it was preplanned, like "I'm going to break up with you because you didn't bring me my coffee to bed this morning. It has nothing to do with the fact that the guy that keeps calling me is richer and cuter."

Because I spend so much time in waiting rooms in hospitals I don't get to see much of my friends any more. But we do have little spontanteous outings. The other night for example we went to see this little exhibit of Finy Leitersdorf's fashions of the sixties and seventies. They were always impressive, and one of the first wonderful things my mother-in-law did for me was to buy me a fabulous desert coat. So it was a real pleasure to remember what real Israeli designing was about. But there was another surprise. A letter from Finy's husband Yonatan Simon to my mother and father-in-law 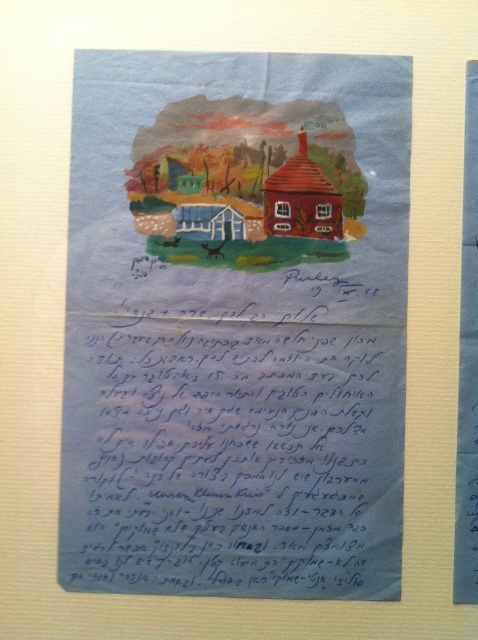 and then a drawing of his daily schedule 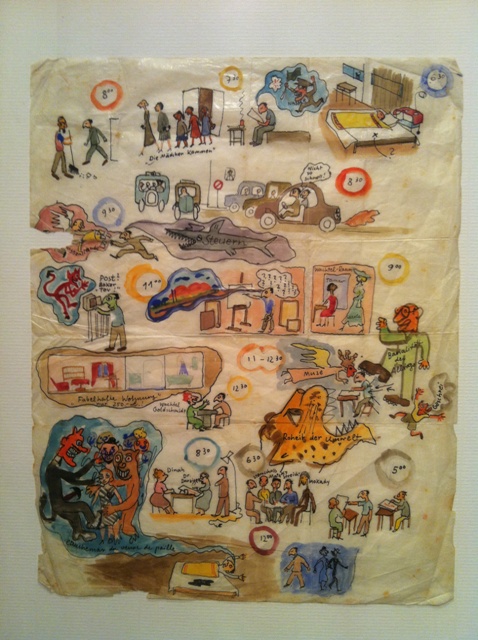 that included a sketch of his art class with my sister-in-law Dina. 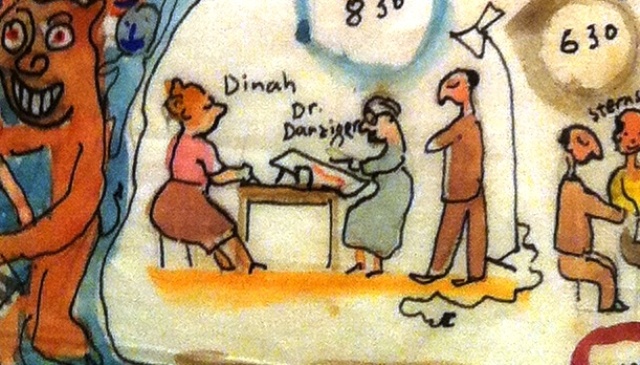 So it's time to get the canned goods and water bottles into the shelter. My cans of choice is baked beans, tuna fish, and corn. My friend in Beersheva says that she sends her husband to her supermarket but otherwise they stay home and try to identify whether the noise is from the grad missiles hitting the iron dome or a neighbor. These are not fun times.

Let them not get worse.

But how can Israel just sit there and let its citizens be indiscriminately killed by barrages of random missiles?

So we had a ceasefire, and rockets are still falling, and we' re still attacking the rocketeers. I understand from my friends who write me from abroad that nothing is being mentioned in the news about the barrages we're getting on civilians. Does that means that in today's day and age we could be destroyed and no one would know the difference? Just like my aunts and uncles?

In the mean time Khaddafi has fallen and it is the heartfelt hope of all of us that an enlightened democracy will rise and blossom!