We keep talking about the possibility of peace and the possibility of war. These are two antithetical possibilities in numerous ways. Peace with Saudis, war with Syria.... Neither are really probable although war is more likely than peace. And it is terrible to anticipate the future. To return to the animals, it's good to imagine the lion lying down with the lamb, but in this future scenario, I don't want to be the lamb.

A friend pointed out to me that I have misrepresented my terrier, that she is quite neurotic. I must clear her name at once. It is not the dog, it is the owner who has inculcated innumerable fears and anxieties that my previous dog, who grew up in the States, didn't have. As I point out continuously, even the nature of animals is different here than other countries. In Ireland, for instance, I was constantly being welcomed by dogs, birds, and even fish. (I'll see if I can find the pictures tomorrow). Here it is more like accosting. They actually have chutzpa in this land. Well, not everywhere. The Arab animals I've met seem normal. But still exceedingly human. Can't resist reminding you of this one: 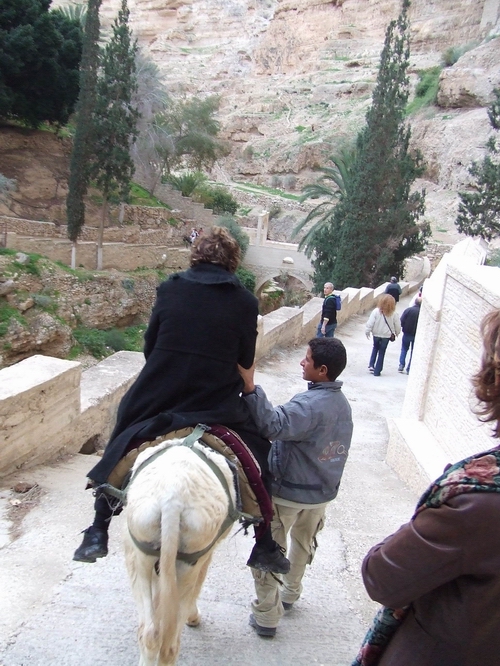 Poor donkey got so scared when he realized I was going to ride him, he farted into my face.

We decided to go to Jerusalem for Slichot. After all, if we're not around for the holidays, we should at least be around to beg pardon.

Some silly virus is keeping me from full activity. It is frustrating but apparently running around, and only partial. So I won't be going to the evening in honor of Rivka Bassman in Hertzlia tonight, or the poetry reading at Moran Kornberg's house, but I WILL be correcting exams. Not fair, but life's not fair.

I am about to get a new bicycle and have great fears I won't be able to handle it and will have wasted my money. So - as often when I am terrified - I distract myself with history. If not my own, then my partner's. So Ezi's great aunt Zehava and uncle Moshe, about whom I have heard a lot throughout the years, turns out to be featured in a ynet piece here. The postcards are incredible, aren't they? Shifra, who now lives down the street from us, says she has a whole wall cupboard with family history like this.

This site also led me to the ynet travel site which in turn led me to other ynet sites like the btmuna site. With so much to see, who has time to write? Especially since I have to take a bike ride tonight.

p.s. and while you're looking up websites, check out the piece about the handicrafts at Lakkiya. I bought purses there for my neices months ago and loved them. Last year we bought a little carpet for our coffee table and find it entrancing. These women deserve support like nobody else does!

Why am I out riding bikes and not attending poetry readings like the one Moran hosted on Sunday? I've still got a virus. But I take pleasure in challenging cats and having all my neighbors laugh at my wobbly attempts to merge with the traffic.

The news of the day is vacation. Everyone's on vacation. Even our Prime Minister. But he can't go anywhere because the security is too expensive so he's staying home for the week. Now somehow I would think he should be going to visit the common people. But leaders don't do that any more, do they?

As for the children - the children in Gaza and in Israel, the children being shot, being bombed, drowning, dying in silly accidents, victims of poverty - for all of them we must take responsibility.