After many years of careful deliberation I have come to the conclusion that my absolutely favorite food is Civoyada. I have no idea what else this dish may be called, but my ex-mother-in-law would make this and gave me the name. Her kitchen is now closed, and the last time I visited her a few months ago, she was in no condition to tell me about the source of this recipe, but the name and her origins suggest a Ladino kitchen. She liked to keep her gastronomical secrets private, but I - as you can see - can keep nothing secret. So here it is: Throw a few pounds of cut up onions into some hot oil in a pressure cooker. Add a cut-up chicken, a tablespoon of paprika, and some salt. Close the pressure cooker and let it simmer for an hour or so. That's it. Sivoyada. I like it with the Israeli imitation of couscous - spaghetti chopped-up to look authentic. It's called 'ptitim.' The ultimate comfort food.

This is Margalit, Orit and me 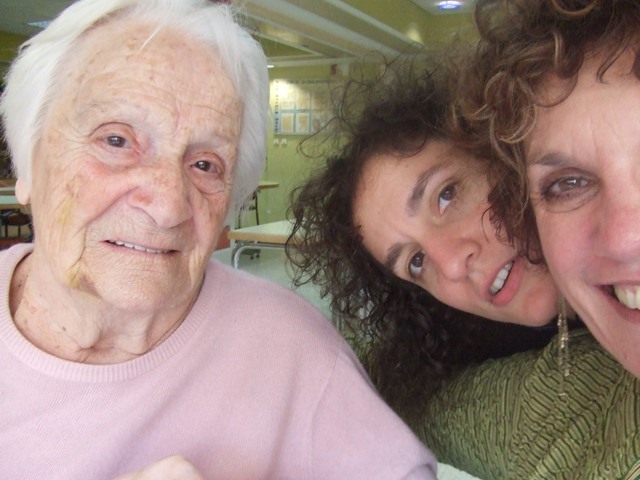 If, however, you don't want to cook, my second favorite is Seniya. I've probably written about this in these pages before (although I try not to peek) but today, as we were eating at Ahmed et Salim's, as I was rejoicing in my Seniya (which is more or less a hamburger baked in Tehina), it suddenly occurred to me that an eggplant, should baked into it in order for it to be perfect. Together? Separately? Any opinions? Why am i so hungry?

Perhaps only food can comfort in such strange times.

We're waiting for the great heat to be over with so we can think straight and start making some guidelines for our lives. On a personal as well as a political level, there has to be some externally imposed order if only so we can go on with our lives. We seem to be in a state of chaos. I don't mean the American government should tell us where to live, although I would like the matter settled, but we ourselves need to decide what we want as a country. It seems to me that Shas, the strange 'religious' party founded by the Rav Ovadiah Josef, has led the way in shifting the focus from national and international vision to self-interest, and we need to refocus ourselves.

In this spirit I told my jovial dentist, Dr. Broude, that I simply had to pay my bill before the year is out. He laughed and told me that the only other patients of his who think like that are those from Shechem, who refuse to let a debt float into Ramadan. I insisted, and I feel better. I will begin the new year with no loose ends.

Whenever I'm in the car between 4-5 I listen to the daily radio show of the Bureau of Lost Relatives. This has been going on since the Holocaust, and there are still people calling up looking for their families. I listen - but I've never had the nerve to call. Even though I've been looking off and on for the past few years for some sign that a cousin might be alive, I have so many questions I don't know where to begin. There are probably thousands like me. What kind of a country can this be that has the need for this program.

When I first began to meet writers in Israel, in the 70's, I would occasionally go to Cafe Stern on Dizengoff Street on Friday afternoons. Sometimes I would meet Dalia Ravikovich or Yona Wollach or Maya Mejerano or some of the other poets. It was Gabriel Moked's court, and many of the major decisions about literature were made then and there. Now he meets people on Thursday afternoons at Cafe Libra and the situation is still the same, even though most of the people have changed.

Haaretz today is filled with goodies. Here's one:

Haaretz is proud to publish (in abridged form) the two winning essays in the Simcha Bahiri Youth Essay Contest, which was sponsored by the Palestine-Israel Journal. The contest, which was open to Israeli and Palestinian young people ages 17-24, who were asked to write on the following topic: "The Day after the Gaza War: What can young people do to strengthen the prospects for peace?" The winning Israeli is Maya Yechieli Wind, 19, of Jerusalem, whose essay, "The Necessity of Doubt," proposes the launching of an Internet "Israeli-Palestinian Doubt Forum," which would encourage the process of questioning among young people of both communities. Haaretz link

The winning Palestinian is Khadrah Jean Jaser AbuZant, 19, of Tul Karm, whose essay, "If Our Leaders Can't Do It," suggests that it is the people, and in particular young people, who have to push their leaders to work for reconciliation -- and if the leaders are unable to do so, to pursue the work on their own.

The full versions of the two essays, plus the runners-up, will be available at The Palestine-Israel Journal.