What a mess we're in at the university. Front page of Ha'aretz, and it doesn't look good.Rightist pressure prompts Tel Aviv University head to examine syllabi. On the other hand, the same paper notes that Tel Aviv University ranks among the best in the world universities when it comes to the social sciences, here. Hmm, what could this mean?

I can't tell you how much I hate those terms - right - left, zionist - post-zionist. The terms themselves force opposition and conflict.

Tonight is President Shimon Peres' birthday party and we're invited. That should be incredibly exciting. Something to counter all the post-zionist propaganda I must be getting at the university.

Shimon Peres is 87 years old. He gave a little talk last night after the best known stars in the country had performed in his honor and he stole the show. After I cried with Leah Kenig's "Oif'n Pripichok" and stopped breathing with Ricky Gal's amazing energy, Boaz Mauda's wonderful voice, Natan Datner's effortless hosting and superlative performance as Tevya, Mira Awad's "There must be another way," and so on and so forth, I thought there could be nothing more to stir at my heart. And then Shimon Peres came on stage. Simple and clear, he spoke of everything - the history of this country that was reflected in his own biography presented through song and dance, the current political situation, the future. He added a little warning that the distinction between the path of peace and war is extremely fine now, and this is a defining moment. And I thought that with all the leaders of the country in the audience, some effect surely must result from this evening. But then I stepped outside into the real world.

You can't see Peres because he was swamped by photographers. He was very gracious about it 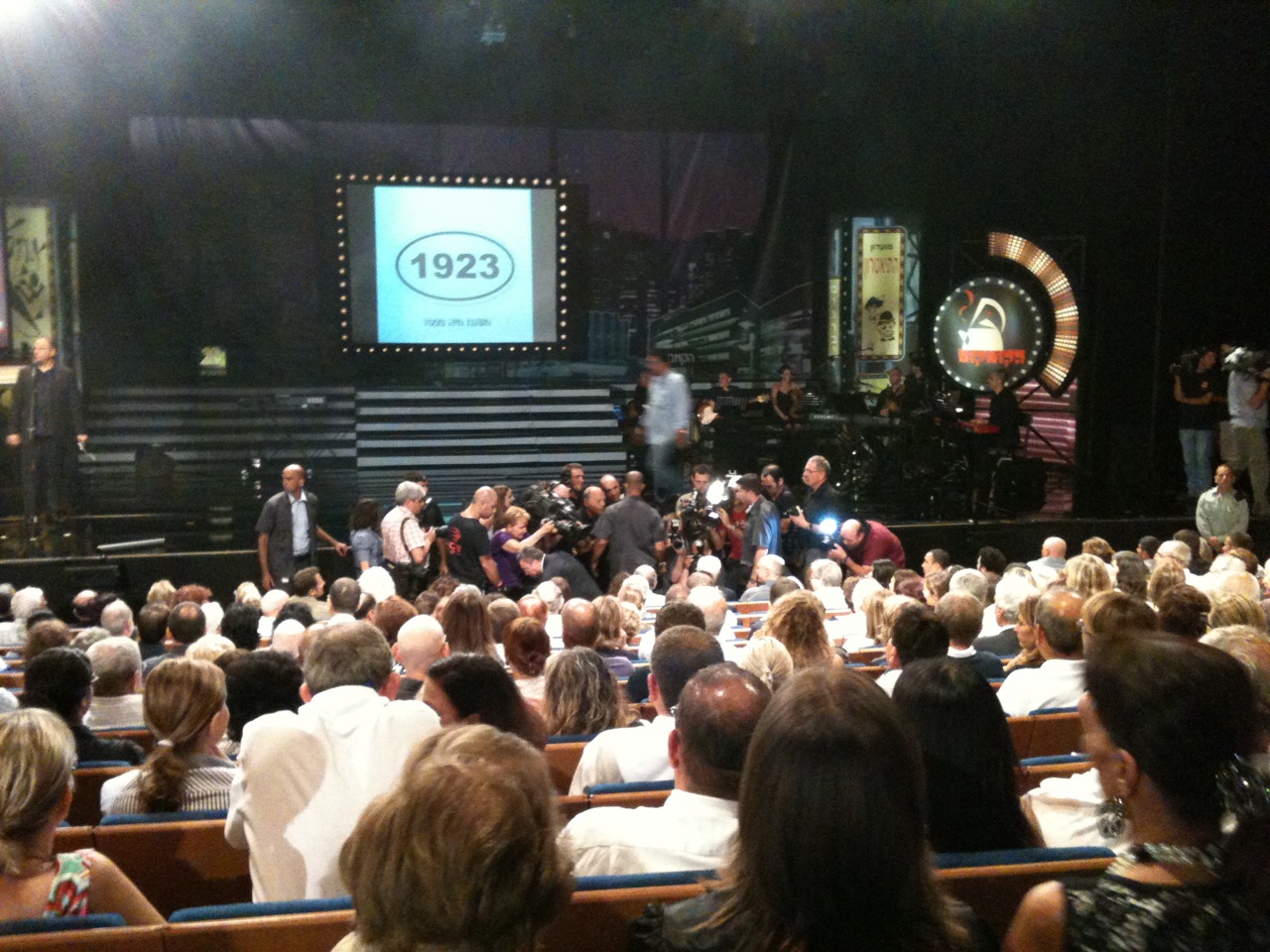 Here you can see him - bathed in light.

The person you CAN see in both pictures is Galia Hai, our violist in Panic Ensemble. Panic is cutting a new disk, by the way, and it's great.

As one who has been endeavoring to stay as close as possible to the airconditioning as much as possible, I try not to use electrical appliances unless i really have to, and have been considering the hours carefully. No washing clothes during the day, no baking, no vacuum cleaner. This allows me to sit quietly and coolly in the dark and consider the cost of comfort....

What do normal people who can't afford air conditioning do - go to public places like shopping centers and movie theaters. It's too hot for the beach. Definitely.

I went to get a little gift at the mall - thought it would take a minute, but I found nothing, and wandered for a long time in and out of the stores. It was amazing how many people there were, and how few buyers. Except for tourists, I think. The sales are over, and some shops are already showing heavy sweaters. It is too hot to try even the summer things on. So the fall and winter clothes can't possibly be attractive.

Ezi says that it took me two hours to get what I said I'd get in the first place because I wanted to stay in the air conditioning. He may be right. It's amazing how much of our lives is affected by the need to get away from the heat

Anyway, I'm out of here - Going up north for Yael's wedding. Metula. And, as I recall, the Arazim hotel doesn't have wireless. If that's the case, I'll be seeing you on Sunday.