i missed out on yesterday - too much happens in the world and nothing happens at home.

It's only because there is so much going on here that i can't choose what to write about. The attacks in the Knesset? The (imagined?) threats on the life of the prime minister? the tremendous sympathy for the people of lebanon and the inability to figure out how to get the donations to the people and not the corrupt government?

In one of my fits of unrest I dragged Ezi to some chinese dollar discount store -Max - to find stuff for the kids to do on the Kinneret when we go there this weekend. Nothing we wanted was there anyway, and people weren't keeping distance despite constant commands on the loudspeaker. We escaped with very little loot and the fear that we had exposed ourselves, but when our granddaughter came over later in the afternoon - all of us abandoned our masks without thinking, who can try on grandma's make-up with a mask on? and how else could we have dyed pink highlights into our hair?

Since yesterday my back has been hurting - exactly where Benny Gantz had surgery. It's not the first time I've realized that whether he's right or wrong in certain issues, I follow him. I have been a Labor lover for many years, and still prefer the policies of Yitzik Shmuli, but there's something about the honorability of Gantz that reminds me of my father - he never really succeeded in making the world a better place, but by his very existence he proves the possibility that there is a better place,

peace! can you believe it? today i was sent a whatsapp with the title - "rare photo of russian corona vaccination". when i opened it there was a picture of a tiny bottle of smirnoff. "that's what we think of Putin's announcement," Yelena said. And then came the Trump announcement and then Bibi's announcement of an agreement between Israel and the Emirates. But I do believe it. too many friends of mine have been to Bahrain, Dubai, etc. just for fun, for me to doubt that there is an intention to normalize relations.

And a moment before Benny Ziffer came on the tv to defend Sara Netanyahu's announcement that she was a battered woman because of all the curses laid upon her. I've been angry with Benny's public defense of the family - but this was so right on the money. He said that when someone cries out, it would be the decent thing to do to listen to her first and not attack her. For years i was thinking that he was defending her for the fun of it, but suddenly i agreed with him completely. She may be crazy, she may have infected the family with her madness, but she's a human being with feelings.

Shabbat Shalom from Pilgerhaus in Tabcha, where the miracle of the loaves and fishes took place. Except that this is supposed to be a quiet center for mediation and prayer, mostly for German pilgrims, but now with the travel ban, it's full of Israelis celebrating birthdays and leaving their bathing suits in the hall to dry. We are really enjoying ourselves and feel very free, even though all the other guests are - like us - refugees from the corona-ridden big cities and we're probably mixing all our germs together.

I have this theory about the whole area - when i look north to the Mount of Beatitudes and south to Capernaum - that it was far more magnetized thousands of years ago and things that can't happen now could easily be made to happen then. Anyway it's great to sit through this terrible heatwave in this humidity in an airconditioned room.

But I had to take the cross of the wall first. It's enough that we're surrounded with crosses outside. 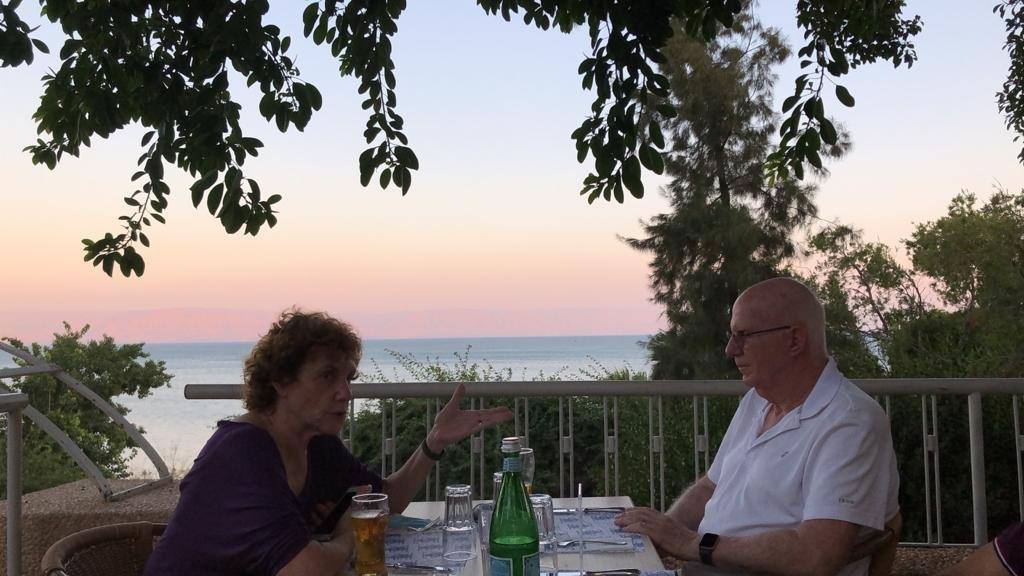 Mark Twain had this to say about the Sea of Galilee: "The celebrated Sea of Galilee is not so large a sea as Lake Tahoe1 by a good deal—it is just about two-thirds as large. And when we come to speak of beauty, this sea is no more to be compared to Tahoe than a meridian of longitude is to a rainbow. The dim waters of this pool can not suggest the limpid brilliancy of Tahoe; these low, shaven, yellow hillocks of rocks and sand, so devoid of perspective, can not suggest the grand peaks that compass Tahoe like a wall, and whose ribbed and chasmed fronts are clad with stately pines that seem to grow small and smaller as they climb, till one might fancy them reduced to weeds and shrubs far upward, where they join the everlasting snows. Silence and solitude brood over Tahoe; and silence and solitude brood also over this lake of Genessaret. But the solitude of the one is as cheerful and fascinating as the solitude of the other is dismal and repellant."

Tomorrow I'll tell you what he said about Magdala

I sense a greater hostility among the Arab people around me. Usually they are the first ones to get my crazy humor, but it seems a little forced today. Maybe I'm just uncomfortable because we didn't include them in our negotiations with the Emirates, but maybe they're the ones who fear they've been shafted. After all, if we make peace with Morocco and the other Arab states follow, maybe they fear they'll be left alone to fight us. But maybe it's the opposite - maybe they'll push on us to equality and recognition. Let's see, please.Wait one moment.

Back to the 19th century, Twain had nothing but disgust for Magdala and Tiberias and the nasty things he said about these part was probably true. The camel dung he found drying on all the mud houses in the Magdala and Tiberias necessary for fuel because there was no timber in the country. But Melville had heard years before that the Jews wanted to renew the land, make it green, and he wrote in his journals that it would never work, In the first place "Judea is a desert. ." .. "In the second . .. . the Jews hate farming." So what happened to make this area so magical, the people so modern and creative, the country so filled with trees, so green, so well kept? Of course I'm looking at it from the perspective of a German Pilgrim Hostel, but it's true all around the Galilee. In the villages and in the towns as well as the countryside. First, the Turks got out. Second, the British left.

Whatever the reason, this place is beautiful and fascinating - the changing color of the sea, the changing breezes, the really nice people - once you take your mask off and make sure you hear each other - the green flora - it's nothing like those descriptions of long ago. But it is so easy to understand why so many people couldn't take the hard climate and the struggle here.

There is another point I want to make about this area. Years ago when we drove up to Mughrar the road up was almost impossible in the dark - a two lane highway with no road signs. Now it's an easy trip. This whole area has benefitted in many ways from the road system, the transportation system, and the visitors who come here as a result. the tourist busses of pilgrims may bypass jewish sites, and spend all their money on the pilgrim sites, but those sites have been modernized in part by the existence of Israeli governments communications and transportation systems. the place we're staying used to be a little youth hostel but was rebuilt to become a site for religious meditation.

(Boy they must be suffering, by the way. Instead of German ministers and religious groups, they're getting rowdy israeli families who know nothing about decorum.) but at least they've got some customers - they were completely closed for at least 3 months at the beginning of the pandemic.