A word about counting.

I try not to count. My jewish tradition says that you never count people because exact human numbers provide deleterious information to the evil eye. So with children, say, you say "Not one, not two, not three..." and the evil eye gets all confused. Unfortunately, however, this concept has spilled over for me into the world of counting in general. For this reason, I find blogs a bit problematic. What if I become such a person of habit the evil eye will know my schedule, and wait for me behind the bushes while I'm having my constitutional? It's the same principle of leaving the cemetery by a different route then the one chosen upon entrance.

Actually there is a kind of logic to that flexibility.

People who have been visiting my sister-in-law during this week of her mourning have known her for over seventy years, have lived in the same neighborhood, remember the house for ages. A few years ago my late brother-in-law Sefi took us on a tour of the neighborhood where he was born - I'm sure I wrote about it. It was a wonderful experience, so strange to me, as one who really has little continuity with my childhood. Every detail, every centimeter, had a history, sometimes personal and sometimes historical and sometimes both at the same time. As new as Tel Aviv is, there are many people who were born with it and have lived it.

Friday the 13 in the month of Ellul (the last month of the year and given to penance and soul searching) was the perfect day to examine witches, spells and the evil eye in Jerusalem. And that is what we did. Starting off in the exhibit in the Bible Lands Museumon Angels and Demons, we got a good elementary dose of Jewish witchcraft and amulets and stuff like that. I seem to be acquainted with much of it, just from personal experience, but it was fascinating to see it all together, tfu tfu tfu.

Then we got to sit at the table of the Rabbi Bakshi, who has exorcised a dybbuk or two. Well, we didn't sit - the women had to stand in the back. But he was very wise and gracious even though our 'guide' kept interrupting him to ask foolish questions about how to recognize the evil eye and stuff like that. Even though she kept trying to prove how much she knew, he didn't show any disrespect or impatience, but his answers should have made her pull up her socks if she had understood them. For example, when she asked about who gets the evil eye, he suggested it was not a common thing, except for people who show off too much. She didn't get it. 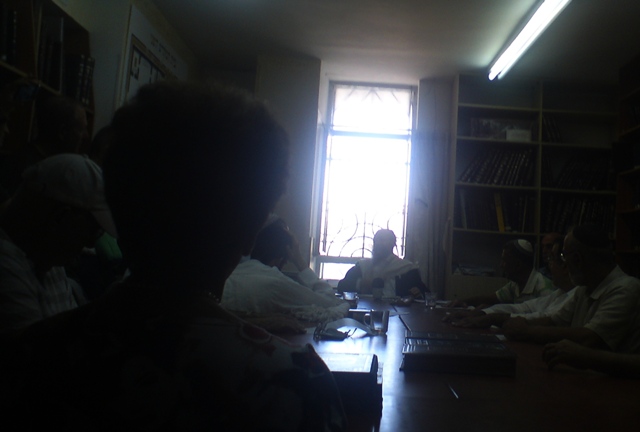 i know the pictures are bad, but he had his back to a bright window and i was sitting on the floor. 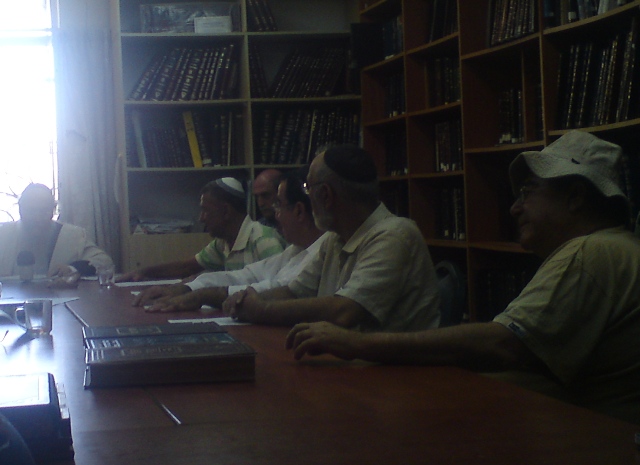 Anyway he gave no practical information about how to get rid of a dybbuk, and the Russian woman in front of me, who had obviously been deserted by her husband and visited by some evil spirits, was incredibly disappointed.

I, on the other hand, was thrilled that he was so intelligent as to talk to people on the level they might grasp. It is clear that he only uses the images of witchcraft to explain to people who will only understand on that level.

We also went to some other Rabbinical courtyards, but just for fun. At the end of the trip we went to a spice merchant in the market to buy spices for amulets and stuff. Picked up a pinch of Myrrh, which is very rare.

And, if you want to know what my connection to magic is, it's right here:

Thank goodness for Tel Aviv. How could I take Jerusalem without it? Tonight we went to the old train station - a wonderful Tel Aviv experience. The train station was first built by the Turks, but we aren't picky about where our history comes from. We restored Hassan Bek mosque even though that was Turkish built too. And the whole German Templar neighborhood in Sarona, now the middle of Tel Aviv. What we really care about are some nice places to walk around, take pictures, maybe shop. As long as it doesn't weigh us down with religious or historical obligations. What Philistines we are! I love it.

This came in some email and although I usually check things out and only then print it, i was so moved by this I put this here first and then will check it out.

Leica and the Jews

The Leica is the pioneer 35mm camera. It is a German product - precise, minimalist, and utterly efficient.

Behind its worldwide acceptance as a creative tool was a family-owned, socially oriented firm that, during the Nazi era, acted with uncommon grace, generosity and modesty. E. Leitz Inc., designer and manufacturer of Germany 's most famous photographic product, saved its Jews.

And Ernst Leitz II, the steely-eyed Protestant patriarch who headed the closely held firm as the Holocaust loomed across Europe , acted in such a way as to earn the title, "the photography industry's Schindler."

As soon as Adolf Hitler was named chancellor of Germany in 1933, Ernst Leitz II began receiving frantic calls from Jewish associates, asking for his help in getting them and their families out of the country. As Christians, Leitz and his family were immune to Nazi Germany's Nuremberg laws, which restricted the movement of Jews and limited their professional activities.

To help his Jewish workers and colleagues, Leitz quietly established what has become known among historians of the Holocaust as "the Leica Freedom Train," a covert means of allowing Jews to leave Germany in the guise of Leitz employees being assigned overseas.

Leitz's activities intensified after the Kristallnacht of November 1938, during which synagogues and Jewish shops were burned across Germany ..

Before long, German "employees" were disembarking from the ocean liner Bremen at a New York pier and making their way to the Manhattan office of Leitz Inc., where executives quickly found them jobs in the photographic industry.

Each new arrival had around his or her neck the symbol of freedom – a new Leica.

The refugees were paid a stipend until they could find work. Out of this migration came designers, repair technicians, salespeople, marketers and writers for the photographic press.

The "Leica Freedom Train" was at its height in 1938 and early 1939, delivering groups of refugees to New York every few weeks. Then, with the invasion of Poland on Sept. 1, 1939, Germany closed its borders.

By that time, hundreds of endangered Jews had escaped to America , thanks to the Leitzes' efforts. How did Ernst Leitz II and his staff get away with it?

Leitz, Inc. was an internationally recognized brand that reflected credit on the newly resurgent Reich. The company produced range-finders and other optical systems for the German military. Also, the Nazi government desperately needed hard currency from abroad, and Leitz's single biggest market for optical goods was the United States .

Even so, members of the Leitz family and firm suffered for their good works. A top executive, Alfred Turk, was jailed for working to help Jews and freed only after the payment of a large bribe.

Leitz's daughter, Elsie Kuhn-Leitz, was imprisoned by the Gestapo after she was caught at the border, helping Jewish women cross into Switzerland . She eventually was freed but endured rough treatment in the course of questioning. She also fell under suspicion when she attempted to improve the living conditions of 700 to 800 Ukrainian slave laborers, all of them women, who had been assigned to work in the plant during the 1940s.

(After the war, Kuhn-Leitz received numerous honors for her humanitarian efforts, among them the Officier d'honneur des Palms Academic from France in 1965 and the Aristide Briand Medal from the European Academy in the 1970s.)

Why has no one told this story until now? According to the late Norman Lipton, a freelance writer and editor, the Leitz family wanted no publicity for its heroic efforts. Only after the last member of the Leitz family was dead did the "Leica Freedom Train" finally come to light.

It is now the subject of a book, "The Greatest Invention of the Leitz Family: The Leica Freedom Train," by Frank Dabba Smith, a California-born Rabbi currently living in England .

Thank you for reading the above, and if you feel inclined as I did to pass it along to others, please do so. It only takes a few minutes. Memories of the righteous should live on.