My son Oren will be leaving for Oregon on Monday. After the terror of uncertainty about the treatment of a deadly disease, I can now concentrate on this personal sadness. With all my heart I hope to see him back and happy as soon as possible.

And return to the government red tape concerning the writers' association.

And the recommendations for promotion

and the theses advising and approvals.

And to my own work.

Yes, I have projects that involve only me, or primarily me for the next coming months.

None of this means that having woken up to a ceasefire I can forget politics and war. I have been dreaming of returning to Gaza after more than four decades and meeting the people i have not been able to see for so long and planning some kind of project.

Our beloved upstairs neighbor Shaul Sharaf passed away this afternoon. For almost forty years I have heard the toilet seat slam down every morning, and thought: our Seraphim are awake. This is a tragedy for our entire building, not only because now we will be missing seeing him and chatting with him every day, but also we have so many widows in our house and very few people who know about building.

We didn't demonstrate yesterday, and when I learned that the Arabs were calling "With blood, with fire, we will redeem Palestine," and waving the flag of Palestine, i was glad. I know it is our fault that we have prodded the Arabs into this extremism in the past years, but I can't get past this division.

An article from the NYTimes by Ben Hubbard about what has happened to the Euphrates river in the past years has awakened Ezi's interest in the bridge his grandfather built there. He is always researching this bridge but has little access to information. The pictures on Google Earth are a year old. But it is pretty much unusable right now. Anyway the name of the bridge was changed from "The Gut Bridge" soon after the British sold it to the Syrian government. But in 1942 the British needed to have an escape route from the Nazis and the Euphrates in Raqqa was the only way. The Imperial War Engineers estimated it would take over two years, but somehow Arpad Gut asked for six months. Enlisting his sons and son-in-law and recycled materials, he did it. Thank goodness it was not needed. Ezi's mother was walking around Tel Aviv with rocks in her pockets to drown herself and her children should the Nazis succeed. I wrote about it in a bunch of poems : here

But that was before the bridge was destroyed. I was always so proud of the story of the bridge, the inventiveness and industriousness of the Gut family. In the Imperial War Museum I found a film of the building a few years back, on the walls of our home are hung the photograph of Arpad and the bridge. here's the one i used as a cover 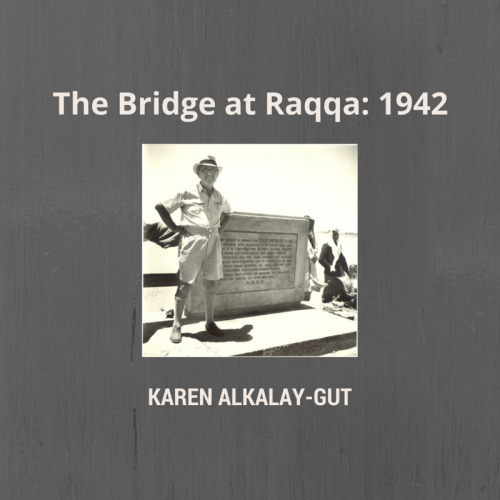 The Jewish funeral service is really very beautiful, allowing a dignified, psychological separation from the dead. But the people in charge of all that has to do with the funeral do everything possible to turn it into something mechanical, empty of meaning although technically correct. It wouldn't have mattered to the subject of the funeral today, since he had no respect for religion, and no contact with the ashkenazi murmurings muttered above his body, but there is no justification for keeping funerals in the exclusive hands of one organization.

This is what the entire country has come to - the examination at the airport of leftist sympathizers, for example, must have been authorized by the Prime Minister maybe with legal consultation in the government. The closing today of the educational channel in public television can be traced to the upper eschelons of the goverment, and there are probably a number of other catastrophes I can list. Perhaps it's not purposeful, perhaps it is just neglect. Perhaps it is, like with the funeral directors, that they are bored with the details of the job.