The alternative celebrations for the seder last night - creative and in some ways very satisfying! today lots of friends called and wrote to say what they did - some were on zoom with relatives, some went out to the balcony at 8:30 when all the neighbors also gathered and sang "Ma Nishtana," some watched the seder on television and sang alone, and some just went out for a walk or stayed home. We did ours on Meeting and maybe because it is a rotten system and maybe because there were so many we couldn't really hear each other - so we sang in 10 part harmony and it was actually quite engaging. Most of the time we could only see one screen at a time. This is what it looked like. 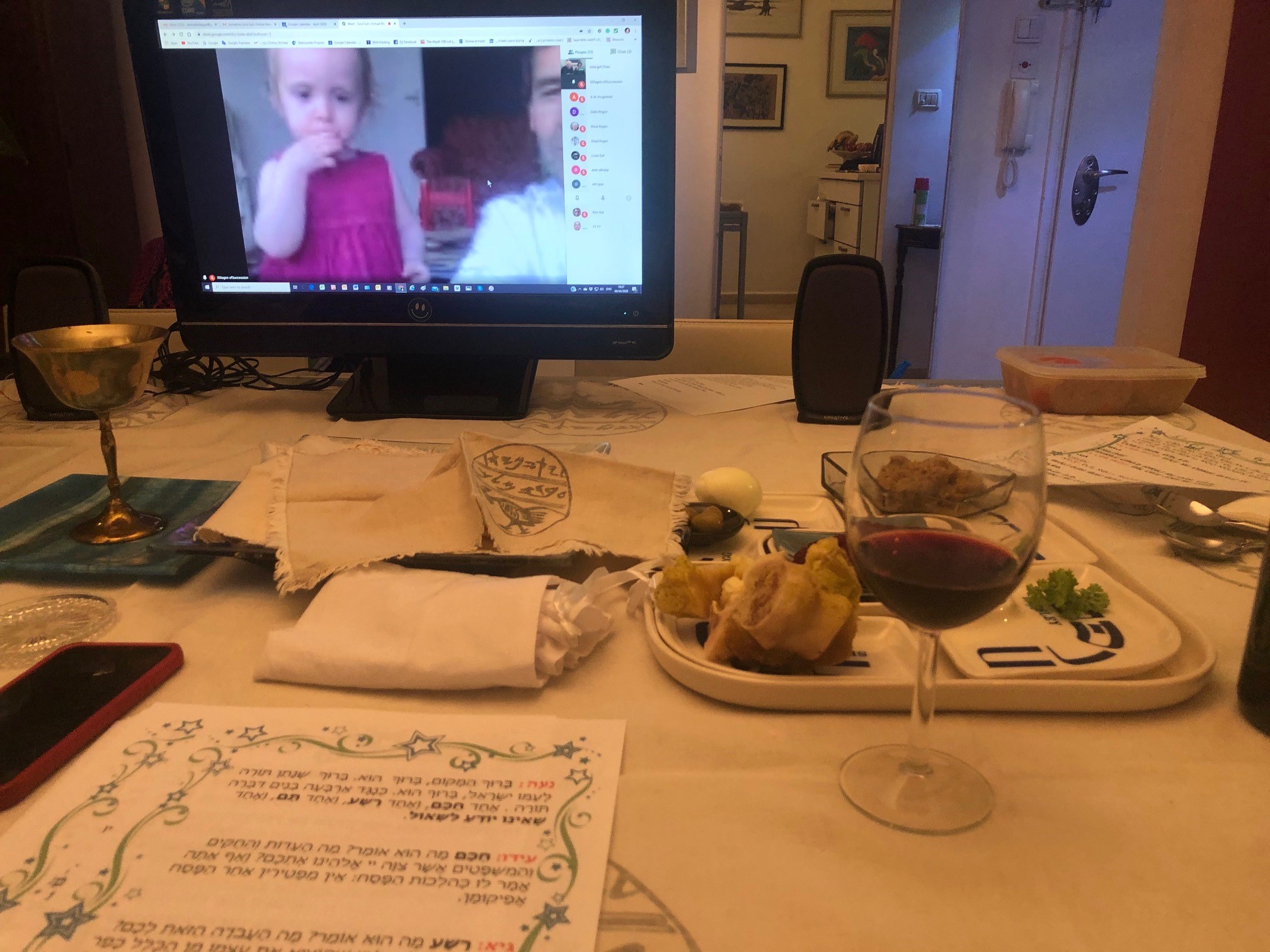 Elijah's cup was empty because we didn't want a stranger coming in and breaking our quarantine, but the rest of the seder went as planned.

After we disconnected we turned on the tv and saw the end of the seder there - and it seemed very inspiring and quite jolly.

Every once in a while they interview some Israeli citizen living far away = and more than once I've identified a former student - someone who learned English lit for the express purpose of going abroad. And most of the time their conditions and very different - in New York one student is moving bodies from the hospital to the refrigerator cars in the back. in a town near Berlin one is enjoying the benefits of the country, the scenery, and the efficiency of the grants given to the unemployed. in Barcelona my step-daughter (not on tv, just zoom) is carrying on closed in her apartment with her singing neighbors, and from New Jersey, I get calls from my friends to keep up my spirits even though they themselves are in the same situation. which reminds me, i haven't spoken to my nieces in a week.

I've been doing a series of poems to put on masks, to overcome that feeling of strangeness we have when we meet other people. Here are a few:

Behind this mask
I'm incredibly beautiful

Focus on my eyes

that one is actually my favorite.

I may have found my calling - i'm going to be a hermit. i don't want to see anyone anymore. i don't want to zoom. i don't want to do anything but wash my vegetables. i don't care if my hair needs cutting and my teeth should have been cleaned months ago. i'm staying home and feeding my paranoia.

i did a zoom on the mishna and a zoom on the 100 thousand poets and i'm zoomed out. I've been whatsapped and emailed up to here. and its nothing like hugging a grandchild or immersing in the sea.

I forgot. We're going out too. Ezi has a pet-ct to do. his treatments have been postponed long enough. I've even been bandaging and rebandaging his hand myself and i think he's planning on taking his own stitches out, but he can't take care of his lymphoma on his own.

Do contradict myself? Very well. So last night the organizers of the hundred thousand poets event around the world met on line in a 5 year reunion of our last conference in Salerno. 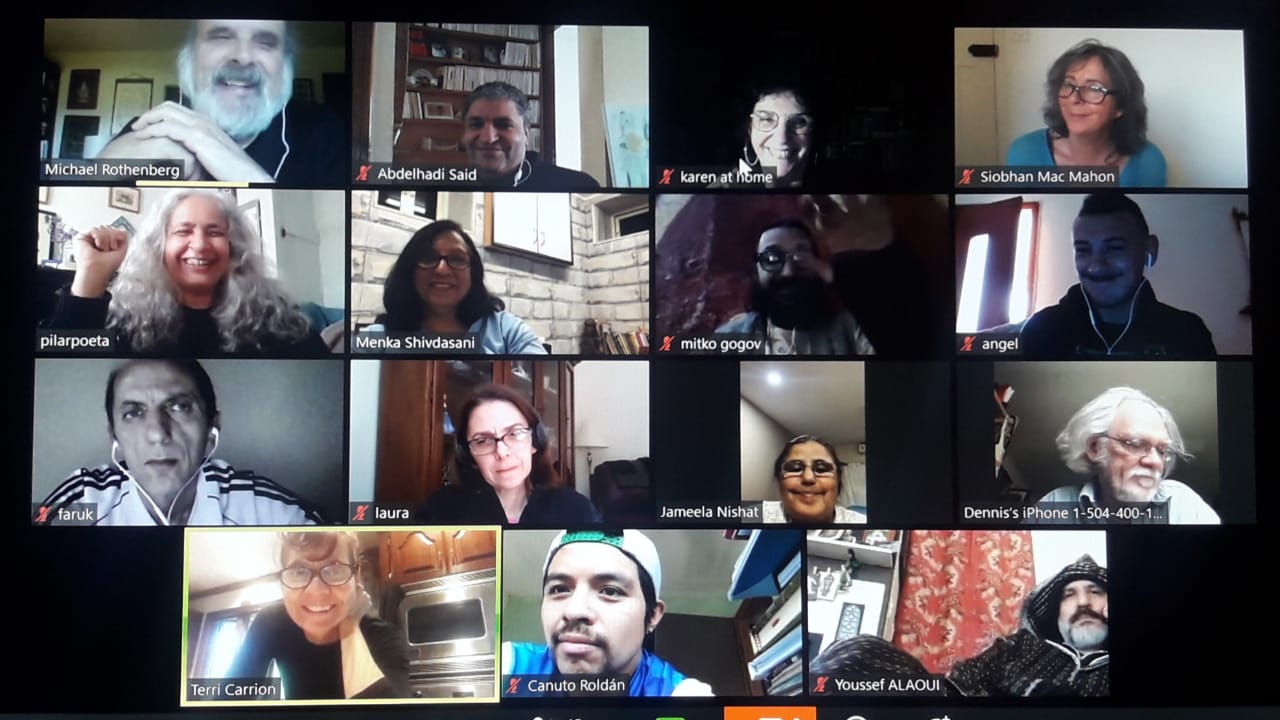 One of the guys from Italy was in hospital greens, cap, and mask, but the others were at home around the world.

Tell me it isn't worth hearing everybody kvetch about not going out in every language possible. some had to leave by the time this picture was taken - it was late at night in Indonesia, it was the wrong time in New Orleans, there were pressing things to do in Vilna, another zoon meeting in Jerusalem. etc. etc. so this is a partial screenshot taken by the guy in Morocco.

My day started with the usual preparations - i wanted to do an online class with my usual teacher but Ezi didn't feel good so I just did the usual stretches with Avri Gilad. then breakfast, then i visited with Oren outside our house. then i changed Ezi's bandage, and treated the absess on his back and then changed the sheets. now i make lunch and go to sleep. how will i ever have time to go back to seeing friends, organizing readings, lecturing, writing?

here's one thing I miss - nature in the spring. this is the time of year to see the sea of Galilee full of water, to see the wildflowers, to smell the freshness. i'd put some earth behind my ears for perfume.

For some reason Ezi's PET-CT was harder on us than ever. The ward was almost empty, and everyone was masked and kept the proper distance, so it wasn't more dangerous, and there was new equipment that made it a bit faster but somehow the tension was greater. In fact we came home and drank big glasses of vodka with our lunch at 4 which put Ezi under the table. me i'm a quiet drunk. all i do is complain a bit more.

My biggest problem is how to observe all the quarantine rules comfortably when all of our leaders have broken the rules. We worked hard to arrange a seder online so that people would not be alone - but Bibi, Rivlin, and Liberman brought their kids in - flaunting it in our faces. That reason alone would be enough for me to vote for Gantz. But poor Gantz is getting shafted again by Rivlin and Bibi and I'm praying that he will make it through the multiple manipulations. It's so clear he is an honest intelligent man facing incredible liars.