what bothers us about Sara Netanyahu? Every day there's another story about her temper, her behavior to workers, her sense of public image, her incredible expenses, etc. The PM says it's politics, that they're trying to get to Bibi through her. But it's through her we see the image of our government. A total lack of interest in the citizens, a total disinterest in humanity, a sense of entitlement that has no basis and no responsibility. (Even in monarchies there is the concept of noblesse oblige.) This image corrupts every element of our society, from education to finance to foreign policy.

What would I like instead? From any partner to any prime minister I would expect some form of social responsibility. I would expect multiple campaigns to strengthen the ties of our society.

We may be back on track with the peace negotiations. I don't know about you guys but to me it feels like the customer and the store owner negotiating the price of a carpet. But the carpet is the earth beneath our feet.

After a nerve wracking traffic jam in Herzlia pituach in the morning, I had a second meeting in Tel Aviv. I should never have agreed to a meeting at The Journalists' House at 11 in the morning because if you do get through the traffic there's no place to park, but it is such a breezy cool place, I thought it would be worth the effort. The meeting was great, but the parking, the parking, the parking. I guess I haven't been following the changes in the parking lots in Tel Aviv because my favorite spot was full and the second best one disappeared and the third one turned out to be an army lot and then the fourth one was incredibly expensive. But then I was late, so I paid. And when I got out of the meeting I had somewhere else to go and shouldn't be walking yet on my bum knee too much so I moved from the expensive lot to the cheap lot at Habima. That brought me only seven minutes from where I had to be, but what the hell. EVERYONE IS ON THE ROAD BEFORE THE HOLIDAYS. Cars, those pesky motorcycles, and those electric bikes with a skateboard across the back bumper. Dangerous to walk! Thank goodness I'm back in my little bed where I have my own space.

why is the bus so crowded?

Of course this is not unique to Tel Aviv, nor is it only a contemporary problem. Kurt Gerron used to sing a song about Berlin in the 30's and not being able to cross the street because of the traffic.

And it's not only the traffic, it's the brashness and the lack of concern about the rules. I've had electric bicycles cross full speed in front of my car on a zebra crossing. But that's part of our culture, and except for the way people endanger us all in traffic I love the wildness of it.

For months I've been publishing these articles in Haaretz about poets and their graves. Some of them are very much inspired by my reaction to the various local graves of poets. One example: Bialik is our national poet, and his mausoleum is large and noble, but Langston Hughes, who helped to create black literature, is under the floor of the library for Black Culture. Bialik bothers me - his faulty character, his presumption, his lack of sympathy, and his grave seems to symbolize this. Any way, it was a great compliment to me to discover Avraham Balaban's article today on the grave of Bialik's lover. It opens up the subject. We need to be more self-aware of our heroes and our villains and our selves.

Where does the time go when you're planning a center? Worrying. Weeks have gone by and I've thought and thought and done nothing.

Actually, for days I've been busy with one of my favorite activites. The haggadah says that everyone should see themselves as if they personally had left Egypt, so i like to put in the photographs of all our guests and print out little haggadahs for everyone. Davide, our bald guest from Italy this year has been cast in the role of the tyrant and every time Pharoah is mentioned I put it a picture of him shouting. 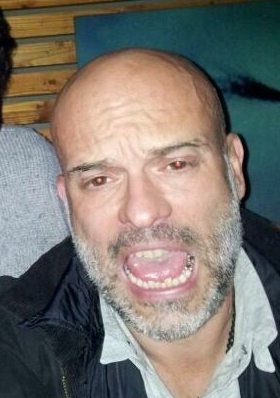 And for the 4 sons, well, not to insult the guests (any further), I've given myself the role of the evil one . 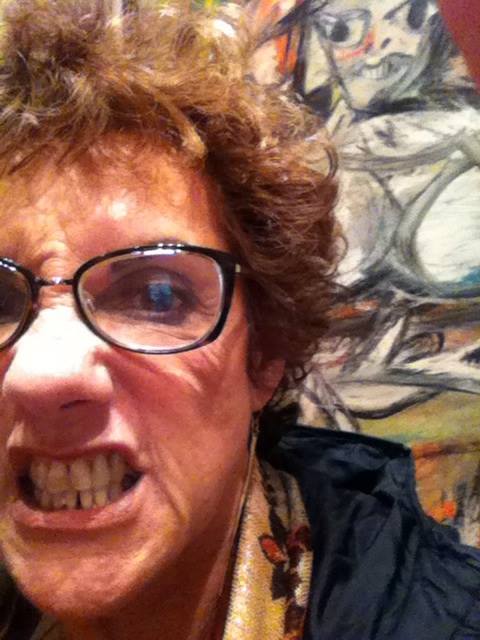 Okay, I'm not really evil, not in this picture at least. I'm influenced by deKooning's monster women in the MOMA.