As usual I spend my Holocaust Day time on the web, searching for information about lost relatives. Let's see, My grandmother died in Stutthoff, my uncle died in Maidonek, the other uncle was shot with his family in Lida, one aunt died in Auschwitz with her family, and another in Zhetdl. I don't know about the others yet. But it can be assumed that they ended their lives in Lida in the pits.

Strange that today is not only the day after Holocaust Day but also the anniversary of the Irgun and Lehi massacre of Deir Yassin . Although some of the information remains secret, this terrible attack has to be acknowledged and addressed.

Somehow I missed the appointment of Yael German to the Ministry of Health. The former mayor of Herzlia, she has done marvelous work in the past and my feeling about our health system is that it needs a little tlc and is otherwise fantastic. I have been watching this shmaltzy series on BBC called "Call the Midwife" which is all about how socialized medicine saved the post-war generation, and despite all the propaganda I am drawn in. Why the US doesn't go for it I'll never know. I've had a baby in the US and one in Israel and the system here worked much more efficiently.

AND WHO WILL REMEMBER THOSE WHO REMEMBER

1.
Verses for Memorial Day—A hymn of remembrance
for those who died in war. Even the remembering generation dwindles and dies,
half in ripe old age and half in unripe old age,
and who will remember those who remember?

2.
How does a tombstone begin? A car burns in red flame
in Sha’ar Ha’Gai. A car burnt black. The skeleton of a car.
The frame of another car burnt in an accident somewhere else.
The frame was painted in anti—rust color, red
as that flame. Next to the frame a wreathe of dried flowers.
Dried flowers compose a Wreath of Remembrance,
Dried bones compose a Vision of the revival of dried bones.
And somewhere, far from here, hiding between the bushes,
is a cracked marble slate and on it names. A branch of oleander
hides most of them like a shock of hair on the face of a beloved.
But once a year the branch is moved aside and the names are called,
and in the firmament a flag flying half mast furled gaily
like a flag flying full mast—easy, easy, happy in its colors and in the wind.


And who will remember those who remember?

3.
And how does one stand in a Memorial Ceremony? Erect or bent,
rigid like a tent or limp as in mourning,
head humbled like the guilty or raised in defiance against death,
eyes wild or frozen like the eyes of the dead,
or shut, to view the stars within?
And what is the best time to remember? Noon
when the shadows are hidden beneath our feet, or dusk
when the shadows grow long like longings
with no beginning and no end, like God?


4. And what shall we sing in the service? Once we sang the song of the valley,
“Who opened fire and who there fell,/ between Beit Alfa and Nahalal.”
Now I know who it was that opened fire
and I know the name of the one who fell.
He was my friend.


5. And how shall we mourn? In the dirge of David for Jonathan and Saul,
“Lighter than eagles, braver than lions,” shall we lament.
Had they really been lighter than eagles,
they would have flown up, above the war
and not been injured. We would have seen them from below
and said, “Here are the eagles, here is my son, here my man, here my brother.”


6. I went to the funeral of Ehud who was torn apart in a bombing,
far from here, newly dead in a new war.
And they told me to go to the new funeral home:
“It’s over there right next to the big dairy.
If you follow the scent of milk
you can’t go wrong.”


7. Once I was walking together with my small daughter,
and we met a man who asked how I was and I asked
how he was—as in the Bible. And she asked, how
do you know him? And I said, “He was with me in the war.”
And she answered and asked, “If he was with you
in the war, how is it that he is not dead but still lives?” 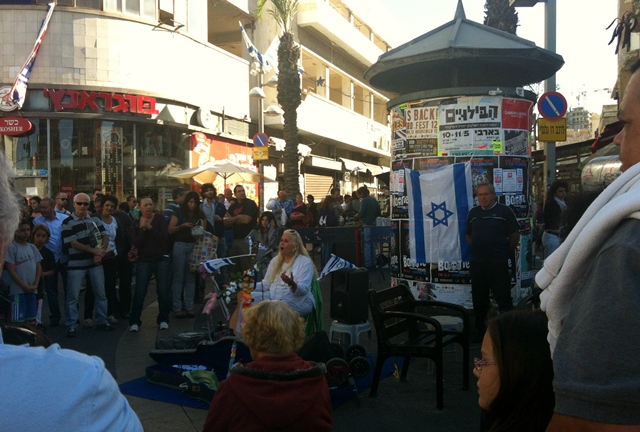 Every Friday Miri Aloni sings in the shuk. At the entrance, on Allenby. Usually there is a crowd, and lots of other things going on, like a table of Chabadniks with their tfillim. Today is a little different, as we're facing a tough weekend, with wonderful weather, Sunday afternoon bringing in Memorial Day and Monday evening introducing Independence Day. So shopping is imperative, and the shuk is more crowded then ever.

Miri stays in my mind. We met at Dahlia Ravikovich's funeral, and sat by the coffin together, feeling for that hour that we were intimate friends because we shared a grief, but I never met up with her again, and though i see her occasionally singing in the market, don't speak with her. She's working and I can't interrupt, but she sees me.

She sees everything. She saw Rabin - she made him sing too - and then he was killed.

It's shmaltzy but as I baked this cake I couldn't help but think of those who would smell its delicate aroma. And those who won't - on this coming Memorial Day.

Preheat oven to 350° F or 180° C. Grease and flour a tube pan. Beat eggs and sugar until thick. Gradually beat in oil. Stir in flour, baking powder and salt, add orange juice. Beat until smooth. Mix in zest and vanilla and almond extract. Pour the batter into pan, and bake for about 40 minutes, or until the cake tests done.

Cool 10 minutes then remove from pan.