So it's 2 a.m. and ezi woke me up. now he's dreaming and i'm all alert. But I finished the haggadah for this year - using the standard text but inserting family photographs as illustrations of historical events. You know, like this one of Ezi's grandmother and her cousins who lived in Hebron at the turn of the century: 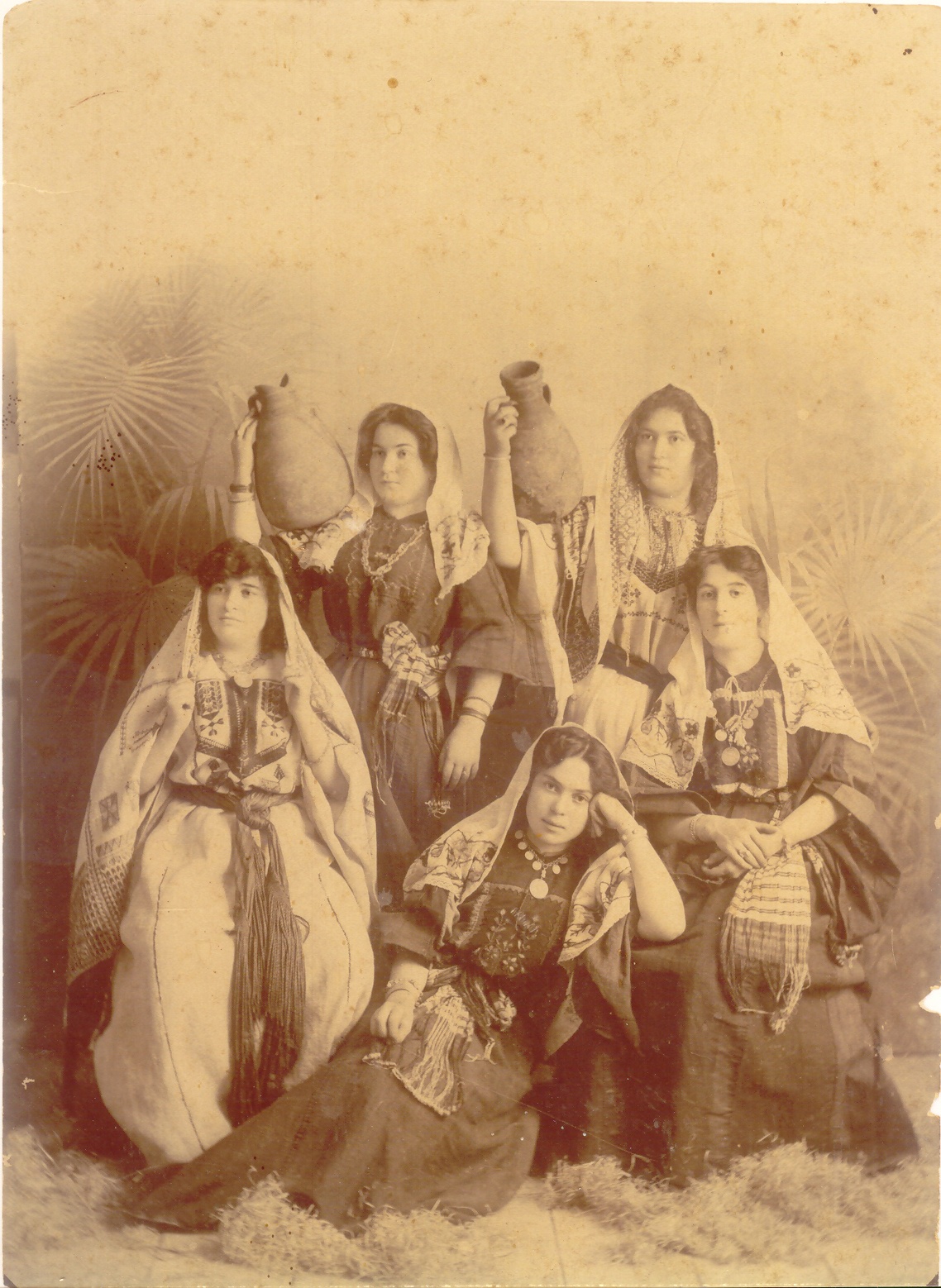 Don't use it please without asking.

I have been wondering at the embroidery - is it hebron? is it russian? anyone know?

Israel Festival - Zirat Hafestival May 29, 2006, 21:00 p.m. You won't find my name anywhere on the site, but "love soup" is the poem that has meant the most to me in recent years and i'm happy it's the opening act. The English site isn't up yet, and i don't know how much they'll be appealing to an english audience. But I'd really want English speakers there, so if you have a way of spreading the news, I'd be grateful.

What do I do in this show? Because it's an multimedia presentation - music, dance, videoart, singing, and me, i can't even begin to 'gauge' my part - it's all interrelated. i do believe it will be wonderful - even though I'm driving the producer crazy with my kvetching - it is shaping up to be a complex and fascinating experience.

Professor Lapidot, the famed dermatologist and laser surgeon, always surprises me. Not just because he is so skilled and quick in his diagnosis as well as his treatment, but also because of the range of his clients. We went to get something taken off of ezi's nose and to ease my aching veins, but there were far more interesting things in the waiting room: ethiopian tattoos, skin infections of the populations exposed to everything from sewage pits to inbreeding, and religious people with funguses from the hot clothing... He is so highly regarded as a dermatologist I am sure he can charge the highest sums - but the mix of people in his office indicates a heart one does not always find in a great scholar and practitioner.

Warning: The Jerusalem Post has reported that Viagra is not kosher for Passover, because the coating on the Pfizer drug contains leavening. Be advised.

Notice how ardently I am avoiding the crazy situation around here - the wanton shelling and the rockets killing and injuring innocent lives. We read about stiffening necks in the seder, about how pressure doesn't always work, but some of us continue to push the rest of us.

We were listening to Mahler's arrangements of German folk songs as we made some final purchases for the holiday, and while I was overwhelmed by the music, I couldn't keep from laughing at the texts. Schubert's leider do that to me too. They are simply stupid at times. But when I hear Hebrew songs, from Rachel to Natan Yonatan to Shalom Hanoch even to Dag Nachash, I am overwhelmed sometimes by their depth. Anyway I came home and put my feet up (vein treatment yesterday) and the Israel channel has a program about Rachel - and Sharon Hass is saying how much she hates poems composed to music because they are vulgarized. And to a poetry purist, she's right. But just the fact that there is a program on tv about a woman poet of almost a hundred years ago at this moment is partly due to the fact that she was put to music and became incorporated into the general culture.

Hard to translate her - she's too simple - like Emily Dickinson. Here's one try:

AND MAYBE IT NEVER WAS...

And maybe it never was..
. Could it be
that I never rose with the dawn
to work in the garden
by the sweat of my brow?

In those long and burning days
of harvest,
atop the wagon heaped with sheaves
did I never raise my voice in song?

Did I never bathe clean in the quiet blue purity
of my Kinneret... oh, my Kinneret,
Did you exist or was it only a dream?

She's talking about the days when she was a pioneer, before she was exiled by tuberculosis to a solitary flat in tel aviv. She's also talking about eden. And about reality. The fact that it also works on a superficial level and sings out to you on the radio... is even more wonderful.

How was your seder?

Our seder had many many children and so it went like this: We were slaves...let's eat.

And did you notice we went into Gaza suddenly? Okay, the rockets stopped today, but we don't trust them to clean it up and don't have an agreement with hamas, so we just went in there...