The garbage dump of the area, Hiriya, has become a popular recycling site with all kinds of activities for children. As least that's what they said the other day on television. So when we got there and stood in the long long line, smelling the garbage, we thought we'd really be missing something if we gave up. But ..come on..how good could it be if you have to wait hours to get in. so we gave up and went with the kids to a park which was great fun. then we started fulfilling our afikomen promises and went off shopping. And then to the Diaspora museum where there is a good but superficial exhibit on jewish humor. We went for the kids so the main attraction was the exhibit on jewish heroes. Superficial isn't the word for it. i saw it last year and can remember only the smell of the sockless feet on the carpet. but the kid we took then was so excited by the computers that he couldn't be bothered to go to the bathroom and he soiled himself. this year the other kid was excited as well, and only the closing of the museum persuaded him to leave.

There really are a lot of Jewish heroes, but I went first to check if they still had Marilyn Monroe as a jewish hero. An amazing person and a great actress but come on - a jewish hero? The exhibit doesn't explain how she was a Jewish hero.

This is a half day, not only because it is Friday but also because it the eve of the second part of Passover. To celebrate this morning I had pizza in the Shuster strip mall after we got some birthday gifts for tomorrow. i'm not sure if it was chametz or not, but there was so much chametz being sold it wouldn't have mattered.

Now I was delighted. I have been so angry at the rabbinate and the stranglehold they have on every part of our daily life I feel the same need as most people here to break the most basic of laws. We worry about the Habad coming into schools and teaching the kids about holidays. we worry about the lack of edible food in the hospitals because of extreme dietary laws. we worry about the corruption inevitable in the enormous funds doled out to yeshivot at the expense of public school. Today was the first time I can remember taking such pleasure in hametz.

Noon, Friday, the holiday of Passover. A normal balabusta would be serving a cold pashtida and maybe a cucumber yoghurt soup after shul. Me, I'm in Tiv Tam with the rest of the epicorousim. 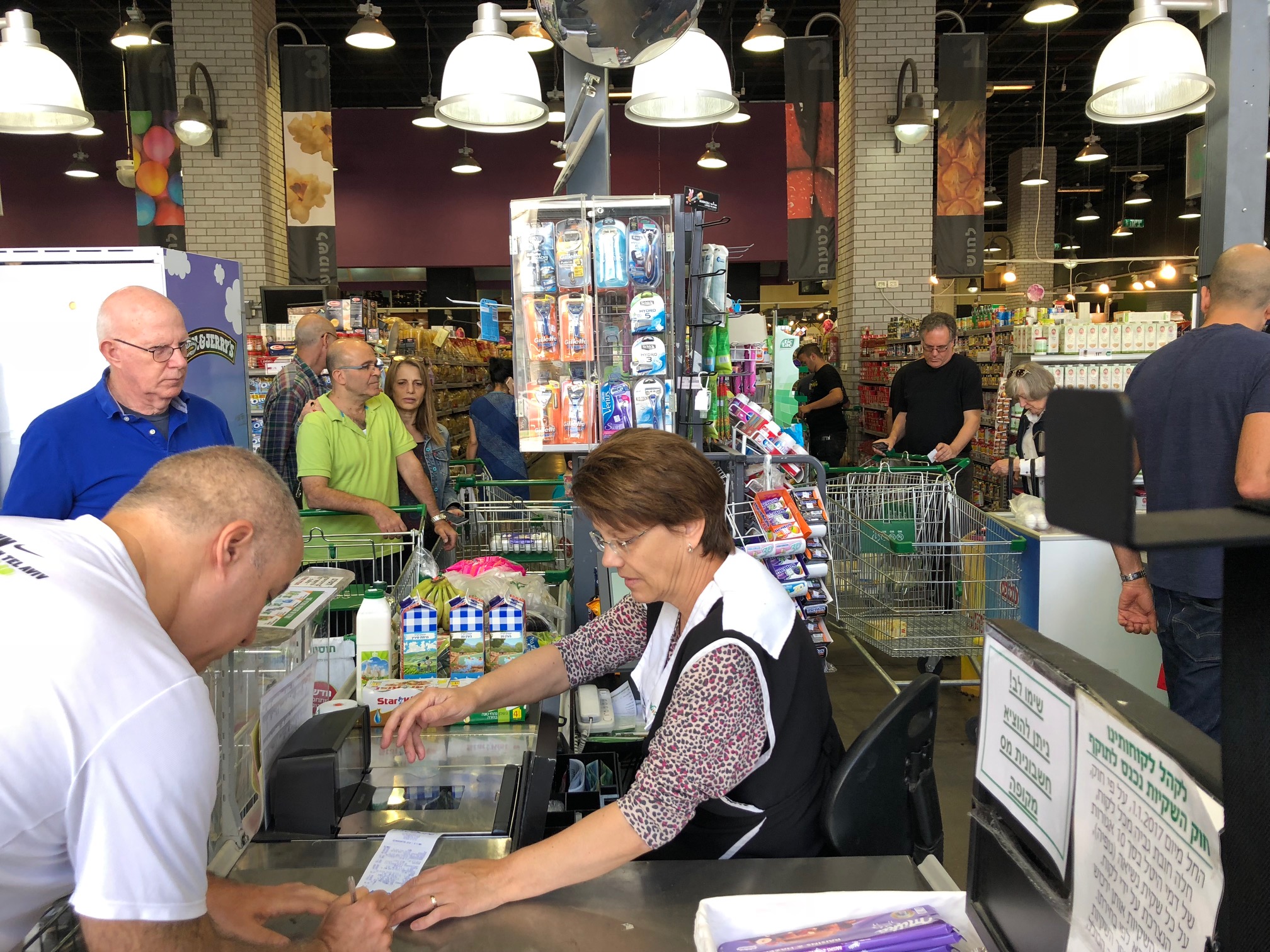 It's so crowded there are no carts available, no room to manipulate the aisles with the carts that are available, but a surfeit of fresh and beautiful food.

All the Russian delicacies are there - kfir, borsht, caviar, shinken, ikra. And suddenly a picture comes into my mind of the Russian supermarkets in Khrushchev's era.

I don't think the divinity would disapprove of my purchases. but perhaps he wouldn't be happy with the spite in my heart, the fact that I am only there because of the rabbinical decrees that limit my life. I have lived by all the religious rules in the past and felt no confinements in them - because they were rules I chose not impositions from crude and corrupt people who became leaders through nefarious means.

But do not think i do not celebrate the holidays. Children, grandchildren, friends, all are suddenly free and cheerful and... hungry.

Computer woes. Eventually we'll figure out the whole thing but at the moment I'm morning my carelessness. Can you hear my screams of self-blame?

The holiday is now over - except for Mimuna - which is a strange made-up feast day. sorry to be a grouch. but i really am tired of being herded all the time. it will pass this week when we get to Holocaust day.

Cyclon B. how many Jews were killed with cyclon b? how can we bear it that it is being used against our neighbors - how does Russia bear the fact that they are aiding Assad in this travesty? 150 individuals and countring. The sense of helplessness in the face of this mass murder is unbearable.