I'm up early and getting ready to go to Maghrar today. As always I don't know if and when I'm reading at the festival but it is such an experience to hear poetry in so many different languages I don't really care. Anyway, I've heard my own poetry before. But if I read, what will I read? What poems can speak to such a varied audience? And in what language? If I read in English the guests from abroad have a better chance of understanding me, and if I read in Hebrew the Arabs and Druze have a better chance of understanding me. The Jews don't listen anyway.... I think I'll go for Yiddish.

Thanks to all of you who reminded me that this is the eighth year of my diary. If you don't hear from me tomorrow it's only because I'm away, not because I'm celebrating. I now have a phone with internet and maybe, just maybe, I'll be able to figure it out. But the concept is not very appealing.

I'm also not very excited about getting on the roads in Israel during the holidays - its apparently one big traffic jam.

Yesterday afternoon we avoided that problem by bicycling down to the north port. Now that the walkway and bike route is open on the beach all the way from the beach at my house down to Jaffa, it is very appealing. But the traffic isn't better - I'm not put off by all the people picnicking - Arabs and Jews hidden under a cloud of coal dust - but they all have children running around underfoot and I am not the greatest cyclist in the world. Couldn't even figure out how to ring my bell for the longest time. But I really enjoyed getting off that bike for a snack at the port. 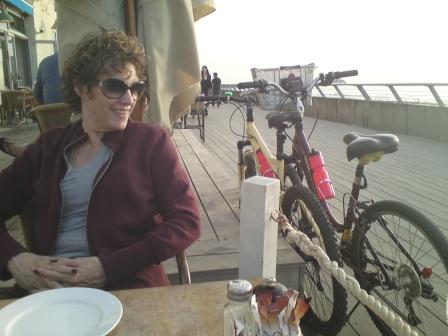 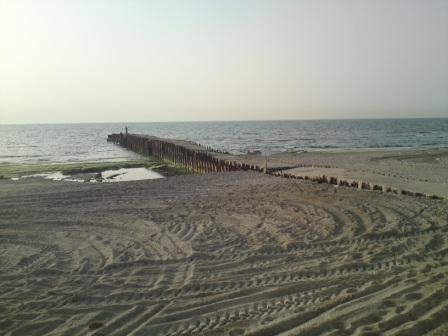 This is the outfall Ezi's father and uncle built in '55. The family used to come there for picnics while it was being built. We passed it just as the sun was setting and it reminded me of how much work was put into the country,

To avoid the holiday traffic we decided to leave Mughar (Mrar, Maghrar) after dinner and zipped through Highway 6 to Tel Aviv, leaving Maya Bejerano in Tel Aviv and arriving home in less than two hours. Two hours and a different world.

I write something long and rambling in my blog but the internet fails me and it all gets lost. So now we load up the pictures, pick up the dog, cook lunch for the kids and fill in what was lost. Patience.

Here's a photo that looks kind of scenic and innocent. It's the watch tower at Netofa set up by the Keren Kayemet to guard the forests below against fires. 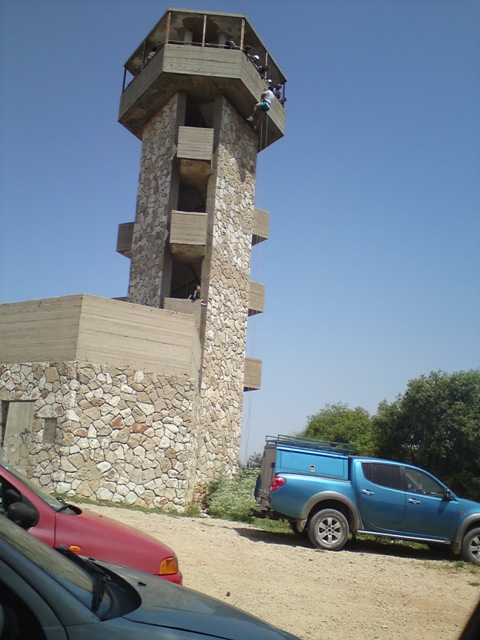 When we got there there were a couple of Arab kids climbing on the roof and throwing bits of burning newspaper off, and a couple on the top floor of the tower watching the ashes go by. There were also a group of older people (almost my age) getting a lecture in Hebrew about all that could be seen from the tower. Soon after we all descended, and another group of religious Jews climbed the stair, a small group of snapplers get ready to climb down the wall. So what you see - if you look carefully - is a snappler going down the side, a village kid looking up with wonder, and a variety of onlookers at the top. That's like Babel rebuilt. 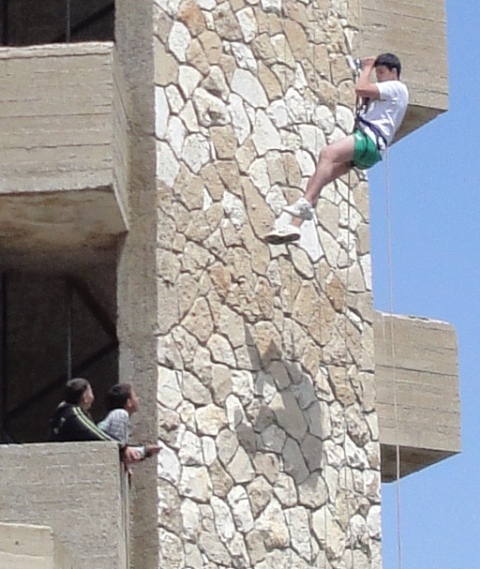 What I liked most about the festival at Maghrar was the opening: 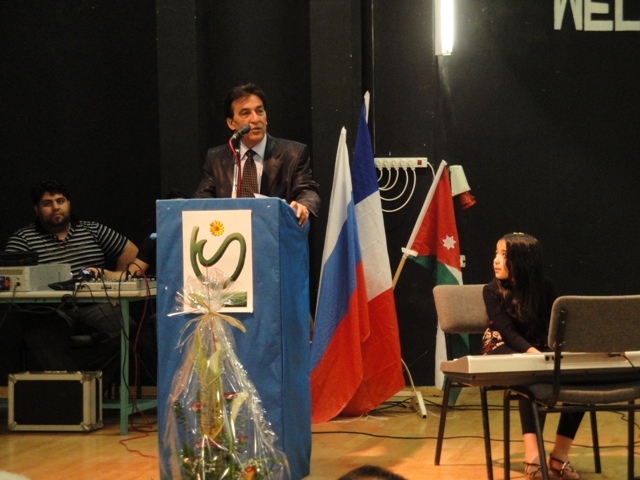 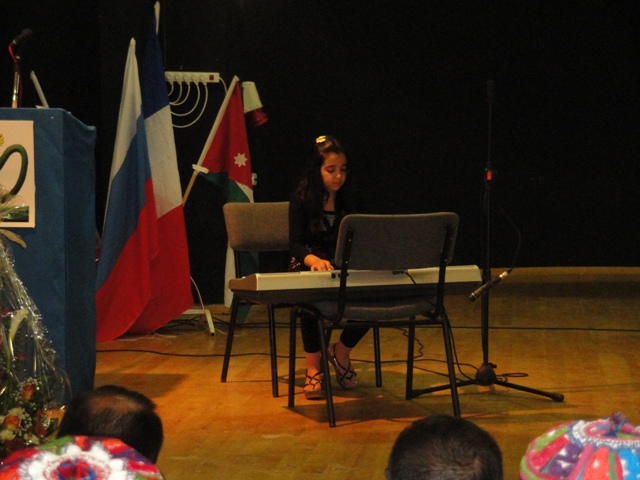 When a little girl opens an international poetry festival with selections from Beethoven on keyboards it's got to go right.

I also found great pleasure in the audience: 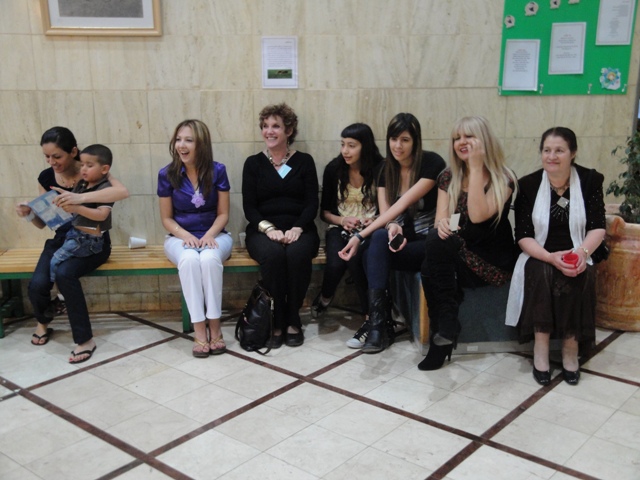 Here they are waiting at the reception, the only people not doing pobiz or some kind of biz.

This is Kristina Nikolovska reading a brilliant poem called "Tactica" about finding parking. 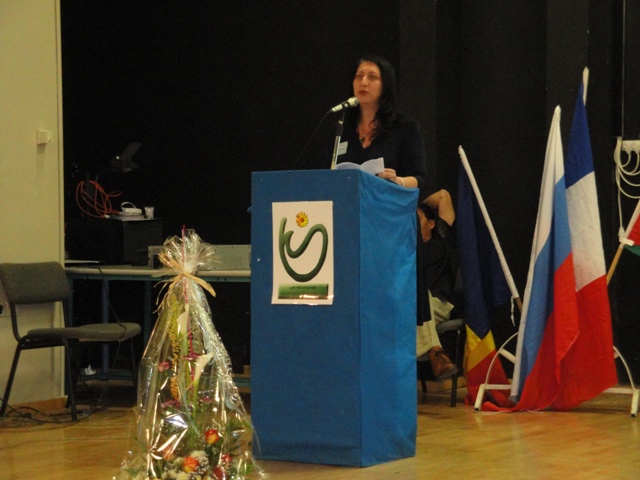 Most of the time, however, we were too fascinated to take pictures. 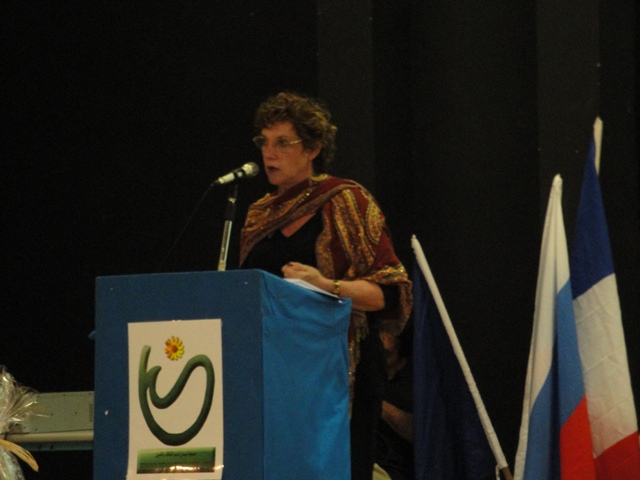 and in case you were beginning to suspect that I might have lost that old narcissim, here I am. 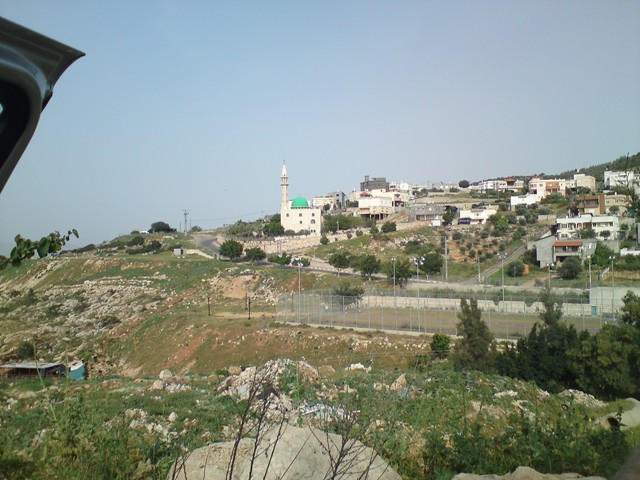 It had such a great view I took innumerable pictures - but won't bore you now. 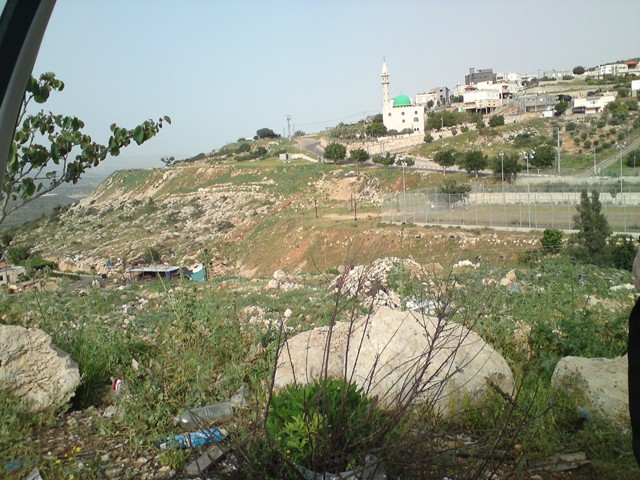 By the way, when we went to Nazareth everyone told us we had to go to Diana. So there we went. 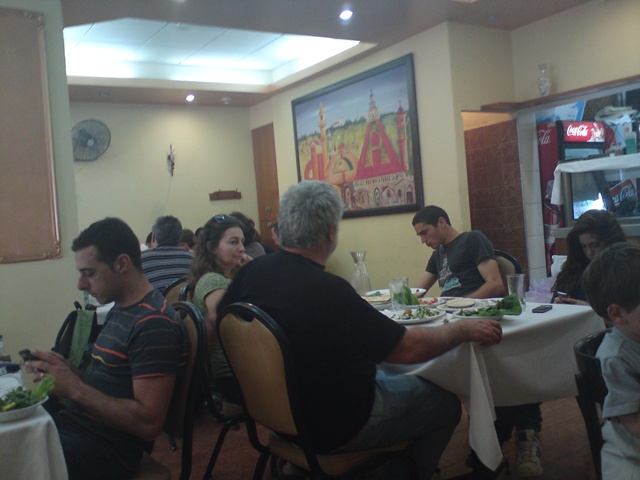 Nice place. Incredible salads. But I can't help thinking that the only reason we went there is because someone once reviewed it. Any one of the other places looked just as good to me. And if no local people eat at Diana's, I really wonder.

Did the runaround in Ichilov yesterday and even though it was incredibly simple it wore me out. The patient (in this case me) comes in hungry, does the lab tests, gets coffee, does the stress test, talks with the cardiologist (in my case to talk poetry as well as potassium), eats, goes to audio tests, lung capacity, optomologist, internist, surgeon, and gynocologist and then goes home within four hours. Results next week. It's the same series that noticed that Ezi had something wrong with him a few years back when he was pretty much symptom free. I'm constantly impressed with the medical services availability around here - even for people like me who never know who's the hottest doctor.