I've been under the influence of Holocaust Day for the past few days and have started writing about my aunt Malcah, putting together the isolated facts i have about her. This is part 1 without pictures and stuff. I'd appreciate feedback:

There are times when memories disappear, sometimes for ever. Sometimes they return in a flash, at the very moment of their great significance, and it isn’t clear whether they were there all along, or made up on the spot. My own memories of Malcah, whether buried, forgotten, or never really clarified, were always accompanied by tears. My mother’s tears – whenever the name was mentioned.

There were other names of her sisters and brothers that could evoke weeping, sometimes because of the holocaust, sometimes due to some other tragedy or trauma. There were names too that would bring her to laughter – at a private family joke, a song, a loving event. But Malcah was always for weeping, uncontrollable shaking, and a comfortless mourning.

I was a child, still living in my parents’ house, sitting on the sofa and, I think, reading a novel, when my mother came in to tell me the newly discovered details of Malcah’s death. But her usual narrative skills were broken, and I can only recall phrases: “Burnt alive,” “He saved the other women but had no time for her,” “her babies dashed against the wall before her eyes,” “heroic partisan,” “burnt alive.” “Burnt alive.” “Burnt alive.”

Her name, I thought, was Katz, perhaps because many years later my father’s sister mentioned that she knew the husband, the survivor, who lived in Brooklyn, but whom my mother did not want to know. Maybe she even said his first name was Wolf, but that could be one of my reconstructions. I don’t know. I didn’t dare know too much, then.

Then one day, in my cousin’s apartment, my father’s sister brought in Abba Kovner, and introduced me as a niece of Malcah. “Ah yes,” he said, “There was a fire.”

“But she wasn’t with me,” he reflected, and his wife added, “She was with Bielski – that was another story.”

From the little I knew, I understood that Kovner was the fighter, the organizer of the Warsaw ghetto, and that my mother’s beloved cousin, Nachum, fought with him in the forests, sleeping in the woods. For Malcah there were no stories of heroism, only victimization, and for a generation plagued with stories of victimization further inquiries could wait.

It was only with the internet, dozens of years later, that the inquiries began, only with the uploading of endless documentation that I began to discover my responsibility.

I couldn’t find her with the name I had thought, so I looked up the maiden name in Yad Vashem.

The information was strange.

I saved it as text, the only way I knew then.

Every detail stung me – the information was provided by my mother, in 1978.

I remember that day, when they had come to Israel to visit and spent a day in Yad Vashem. She returned home unable to speak, and I, as usual, was occupied with my own life, with proving to her that I was a perfect housewife and mother.

Nothing was said about the forms.

The memory of that day was enough.

Only days after my first encounter with the facts on Yad Vashem did I consider the significance of this information. Not only did I understand that I had forgotten her name, Malcah Kravitz, but I also began wondering about the place. My aunt – a partisan – in Orleans? In the Loire valley?

By the time I went back to the original web site, I was less timid, learned to click on the actual document and see what was written by hand in my mother’s elaborate, overemotional script.

I was so excited I couldn’t see how to download the actual document. But even on my small screen I could see my mother’s pain. Circumstances of death, the form said in Hebrew. “They burnt her alive,” she wrote in Hebrew , in the Otrianski otriad, Lenin Brigade, Puscha Lipinitsianska, she added in Polish, the Lipinskana forest. Her own name was in Yiddish, and her address in English.

The English is a bit different.

There are parts in the document that are wiped out and overwritten. The year of her documentation is written January 1978, marked over what looks like 1967. 1967 was her first visit to Israel, before she knew the details, and 1978 after she had learned about the passive role of Malcah’s husband in her death. His first name, it appears, was typexed out.

So I couldn’t have been that young when she disclosed the details. But I was still too young to absorb them.

In a visit to Berlin in 2010, I met Frank Drausche, a friend of my daughter’s, who listened carefully to my lament about the lack of information. When I got home, a few documents were waiting for me.

It is a death list from Zhedtl, where my aunt lived after she married. She is number 909, born in 1912. She went to live in the town of her husband so her name is listed among the others. It is easy to make out the others – his parents Adam and born in 1875-6 (907, 908), and number 912 and 914, Abram and Masha born in 1941 and 1942. The husband isn’t listed. But the <a href= “http://www.jhrgbelarus.org/Records_partisans.php?searchquery=kravitz”>Jewish Heritage Research Group in Belarus</a> does list him

He survived. But I know nothing of his life, his family, his loves.

Who was Malcah. My mother used to say she was the most amazing of all her sisters, the most spiritual and the most practical.

But as elusive as all my mother’s family seemed to be. In the book of Lida, she stands in the back right corner of her drama class, half out of the picture, a tall blurred shadow.

She sang, she acted the part of a boy. 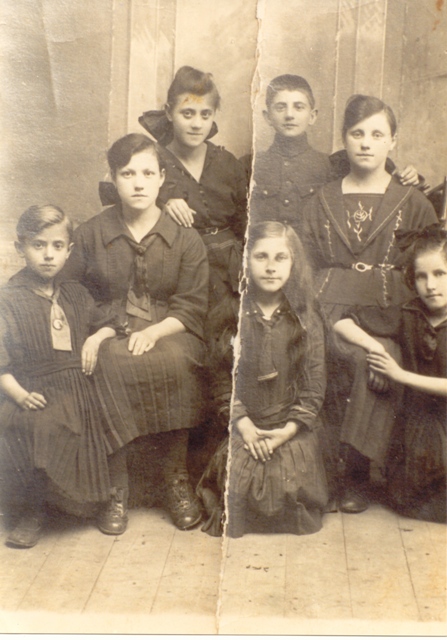 And then she grew up and married, moved to Zhetl,taught in Tarbut School and had two children.

Anyway we're doing our best to stay with happy endings and keep an even keel. But I can't take the Bin Laden Event as a happy ending. Even though it is proper and right. It may prevent future damage, but it may not.

All right, maybe I'm pessimistic. Maybe I'm just seeing the world as a reflection of my self.

Don't want to write - especially not about Bin Laden. Never celebrate the death of anyone.

And the only politics I want to talk about is the fact that when I mentioned to someone at city hall that there's going to be an international celebration of "poets for change" on September 24, he said - we have to help out! That's a great idea! There are things about Tel Aviv that I really admire - it is a cool city.