The major point about the whole issue of the Winograd Report - the one that no one seems to be paying attention to - is that we elected these people who turned out to be incompetent for war because we thought we were moving into an era of peace. We took money out of defence, we didn't arm, we picked people who were not military experts - because we (stupidly) thought we were moving in a different direction, and were going to give land to the Palestinians who would slowly stop attacking us. It was a terrible miscalculation, but it wasn't just the fault of the leaders.

Panic is tomorrow night at Tmuna.

I am reading on Wednesday evening at Maghrar.

Back to the Winograd Report, which seems to have pushed us over the edge. I am in a small minority but I really don't think at this moment the government should be sent home. Except of course for the minister of defence who hasn't shown any talent in this position at all.

May Day. Somewhere in the family album my brother has, he is dancing around the maypole with all the other little British children. I never realized until now that it was just after World War II, and May Day was really a new beginning for all of them.

So maybe we're having a new beginning too. First of all, we've pretty much uncovered every one of our wounds, and, as Boethius says, the uncovering of the wound is the primary step to a cure. And I hope we're beginning to realize that we elected this government and are therefore responsible. I still think we shouldn't change the government - too expensive and problematic - But I think the fact that we know we have to be very very careful, very alert, and very responsible - that we are neither invincible nor infallible, is a very important move towards maturity.

If you weren't there last night, you really lost out. Panic Ensemble is now top grade. With 8 amazing musicians and performers their sound is super, and the songs are seamless, powerful.

I left my cellphone in my car when i drove to the pickup point for the jitney to Maghrar, and the window got broken and my phone stolen. To come back to the car at night, alone and hungry, and to see all that glass and no phone, was disheartening. But it still couldn't cancel out the joy from the Nissan Poetry Festival.

Look, there were half a dozen poets from Gaza there and they brought a message from the Gaza writers' union. There were poets from Spain, Rumania, Belgium, Russia, and I still have to find out where else. And they were good. There was no time to find out details about individuals, but we got a chance at the closing ceremony to hear most of them.

the picture is bad because Ezi wasn't there.

I myself had a problem - couldn't figure out what to read because i usually decide by looking at the audience, and before i had a chance to look at them my name was called. I read what was in front of me then shut up. But the atmosphere of the readings was so positive that I couldn't keep myself from going back up on the stage to read a poem by Naim Araidi that I had translated long ago for the Tel Aviv Review (now Jerusalem Review).

Enemies are sometimes friends
and the vigor of the horses
raises the value of the rider ñ
soldiers dead in battle
are fallen forever
and all the life of peace
is due to those awful deaths ñ
but poets in their life and death
remain but poets
and I shall be among them
a man who brings to men
a poem.

Violins are never warm
if they are never in human hands
and in summer, when the stones are warm
the spirit is within them, perhaps like blood.
Man sometimes errs, curses, rages, quarrels
but forgets at the passing of the storm
and will say it has never been
and will play other melodies
and I shall be among them
a man who brings to men
a poem. 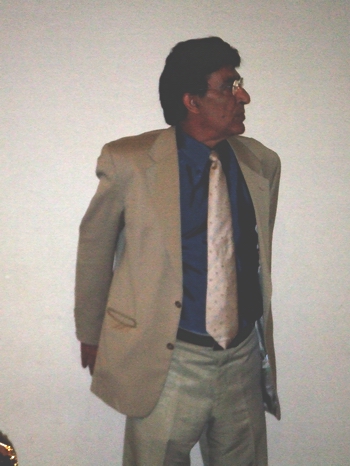 As you can see I can't either. It's so close to Lag B'Omer we might have made him into Guy Fawkes and burned him in effigy. Why can't we get together on something positive?

Well, maybe we will. To see all those people, from so many different political directions, together in Rabin Square, it makes me think it may lead to some positive direction.