a true independence day - we are totally independent from each other. i have been trying to patch up the mistakes i made on the invitations for the zoom tonight - poets are very fussy - and most of the time they have memories as terrible as my own. but they get huffy when they think they are invited but they aren't. if you want to make the 29 people who are - indeed - reading, tune in here.

Can you picture us standing at the window and rattling the bars? All of us old timers are watching the younger generations going around outside and thinking about how we're going to get out one day. One day. But where will we go? I don'r remember any more. As much as the media hypes the longing for families to be reunited, I fear our grandchildren have forgotten the little they know about us, I know it sounds like we just sit around and look out the window while we're actually quite occupied with maintenance and taking care of stuff.

Our zoom meeting last night was an amazing success in part because people are desperate for communication, there were also some pretty good writers and we had a good time. and being to hear the readers and see them up close was quite amazing. The next one will be soon. But it took a lot of preparation, and a lot of 'clean-up'. And I was quite worn out afterward.

indeer it looks like we're coping amazingly well with this virus - and our curve is evening out nicely. but there is a warning that easing up will make the situation worse. let's place bets.

So I'm watching tv and see Dizengoff crowded with unmasked youth, and I get a call from a friend just a bit older than me. He's been trying to hook his daughter up with my son for years, and I'm pretty sure we're going to hear about another plan of his, or maybe some new research he's been doing. But no, after he tells me his daughter came for a visit, he announces the news. "And now she's got corona. And I have to stay home." He's a runner, with no computer skills, and has been severely burdened by quarantine for the past 2 months - like us. "But you've got each other!" he said when i ventured to complain a while ago. he;s right. we don't suffer. and i fool around a lot with zoom and visitors under my window. But sadly I had to refuse even my masseur's invitation. After all, Ezi's going in for his usual biological procedure that reduces his resistance. And I could really really use a massage.

Did I tell you that my article, "Why I Write in Yiddish" came out? it should be here

i confess - we broke the lockdown - last night we watched a movie with Oren. today we picnicked behind the building with grandchildren. We even dropped the masks and the social distancing. i know it was wrong and we tried hard to be good - but it was too much to pleasure to resist. tomorrow morning Ezi goes for his 'dance class' (Abba Kovner once called his chemo that when he had to leave for Sloan-Kettering in the middle of a conversation: "Whoops! Sorry! Time for my dance class1" It still breaks me up.) and it means sitting there for hours and hours. I think that's what made us so weak. But everyone seems to be 'weak.' they're even coming out with new theories to justify crowding into the beaches and parks. Someone told me that you have to be with an other up close for a long time before they can infect you. no one of authority has said that, but it sounds good. We'll see what happens to us and what theories are proven right. I guess there is greater danger in riding the hospital elevator to the hematology ward on the 10th floor. and i'm not in condition to walk all the way up.

Chaucer always liked this date and mentions it several times. For me, today was not so great. First off, the ward was crowded. really crowded. and in the spirit of social distance, although they require that the patient be accompanied, this time the caregivers were put together in the lobby. So instead of getting coffee and stuff for Ezi and holding his hand during the procedure, i sat with a whole bunch of disgruntled people in masks. And of course, because most non-life threatening treatments had been postponed, there was a long line of patients. I was not comfortable wandering around the hospital in my mask. So I sat in the corner for almost 5 hours, so bored i even took pictures. 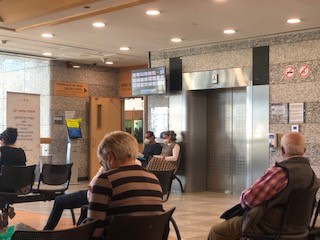 and kept myself busy by texting Ezi, until we came home to sleep. Now my body hurts from sitting so long. and i've got no energy to cook, clean, wash, etc. It seems to me that in retrospect the idea of putting off treatments like Ezi's was not helpful. of course everything is in retrospect. we'll be judging everything we did to counter the corona virus for years to come.