Jiggedy-jig. I'm just home again from Maghrar and points north, with more stories than I can possibly find time to write. As we were nearing Maghrar, and night was falling in the Galilee, I thought to myself that if i could only remember the changing colors of the sky, and the deepening shadows of the trees against this array of blue-grey , I'd be satisfied. But then there was something new every minute for the entire weekend we were there. And there is no way to tell it all.

To begin with, we arrived just in time to hear my name called to get up to the podium, before i even began to think about what I would read. And that part of the evening is a blank to me. There were so many poets after - reading in Arabic, Armenian, French, English, Hebrew, Russian, Spanish, Turkish, Greek... and no translations - so you sat and let the music of the poems waft over you. The reading began long before I arrived around eight and continued for at least another hour. And then we had dinner and followed the bus to the little Druze town of Ein Assad. It was about 11 p.m. when the bus and our car after it reached the town, and shortly after we realized that neither the driver nor any of the passengers had any idea where our rooms were, what their address was, or what they were called,. So he kept stopping and asking surprised villagers. All of them were puzzled, and went to consult with their families and neighbors who sent us back and forth until finally they helped us find the owner.

But it was worth it. The view we could see from our window in the morning was breathtaking. Our hosts - waiting on the roof-dining room with breakfast - were in the middle of the seven days mourning for their mother and yet did not let us feel their loss. They gave us everything we needed. And yet I would have liked to speak with them, and did not wish to intrude. My questions were so trivial, like why are there no dogs or cats in the village? How could I even think of asking them?

And at the poetry festival back at Maghrar, we were too busy trying to understand the poems and the people to ask questions like that. 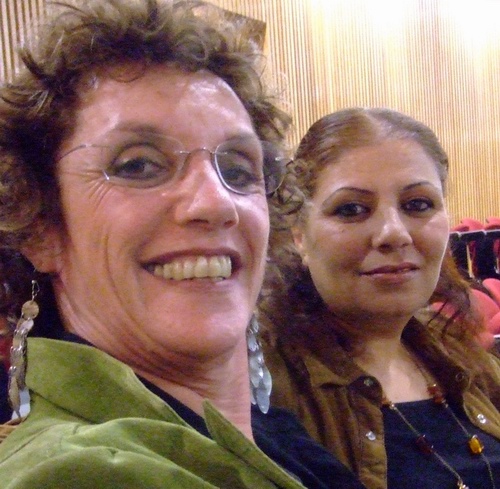 Amal Jesel from Maghrar, sitting next to me here, may have heard a completely different poetry reading than I did - so I was tempted all the time to ask her about the poems I didn't understand - but refrained.

It was nevertheless an amazing experience, and I will write more once I've unpacked.

It's actually even more breathtaking than the picture. And I only chose one at random. 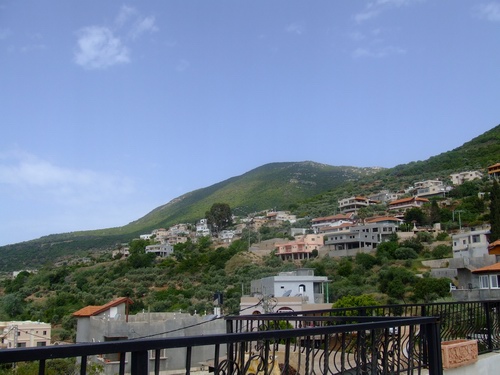 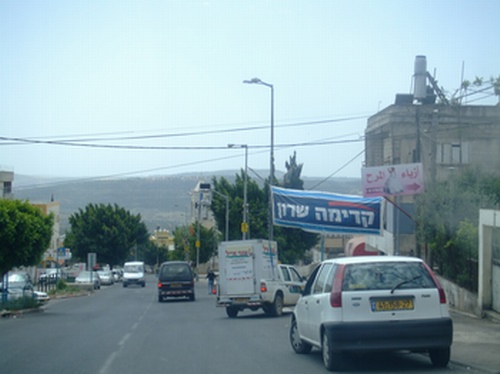 It is also far more beautiful than this. I just took this one because of the contrast. The sign for Kadima - by the way - is not all that unusual. We met a few men in Ein Al Assad who were in the army or the police and had very conservative ideas about what Israel should be returning to their neighbors. 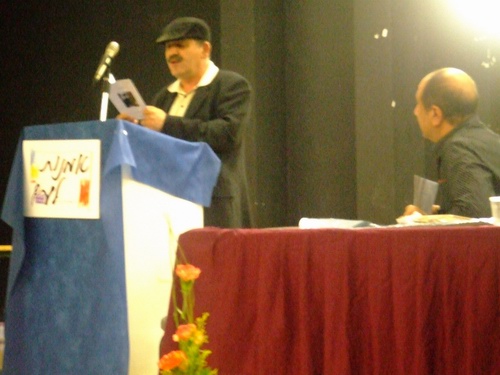 All in all there were some fascinating poets there - really fascinating. And it would have been perfect if only poets had not done the organizing! We needed much more time in workshops listening to each other.

You would expect that we'd celebrate May Day around here, but Memorial Day begins this evening and was felt in the air from the morning. Especially at the university. Not just because of the ceremony that at the university takes place in the day time during school hours. The loss never diminishes. And it is a national loss which forms our national character as much as the Holocaust does.

There are a thousand complexities involved in this. From the syndrome of the sacrifice of isaac to the desparation to preserve the next generation since the previous generation has been lost. A classic poem by Amir Gilboa deals with this subject;

In the morning the sun strolled in the woods

with me and father,

my right hand in his left.

A knife flashed from between the trees like lightning.

and I shrink from my eyes' terror before the blooded leaves.

so no one will be missing from the meal at .

It is I who am slaughtered, my son.

Already my blood is on the leaves.

And father's voice was stilled,

I wanted to scream, writhing against belief

and tearing open my eyes

And my right hand was drained of blood. (1)

The sense of personal involvement in interrelated political, spiritual and military issues and apparent, and its appropriateness to memorial day is clear..Ý

But seperated by a siren only, memorial day becomes independence day and a day of national pride. Our own pride (and the ultimate justification for the memorial day before, is mitigated with questions of entitlement, Take that poem by Rachel Blaustein (1890‑1931), who with a degree in agronomy, worked the fields and tended the animals.Ý And yet her poem, "To My Country" written in the twenties, was the perfect example of the way women viewed their role in the literary world.Ý The poem begins:

I didn't sing of thee, my country,

Nor laud thy name

With acts of heroism

In myriads of battles!

Only a tree ‑ my hands planted

On the quiet shores.

Only a path ‑ my feet wore

The national issue is to big for us to deal with - the best wwe can do is do our jobs.

Mine is this diary - although i often think it is a cop out - i should be with Tayyush, protecting olive trees and school children.

Thank goodness this terrible day will soon be over. I cannot bear it anymore. There is an eternity between the moment you say "Happy Independence Day" to people you won't see tomorrow and the moment you realize that the word "Happy" on such a day of national mourning is only for the psychopath or evil people. We did stop off for lunch at Nona's on the way home and got the chance to sit at the 'good' table because Nona's wasn't full for the first time since i can remember. But until the sun sets I can't even imagine making party plans.

And even then celebrating will be only due to a sense of patriotism.

...So I was dragged kicking and screaming from home to a traditional dinner of felafel and a cake decorated as a flag. And within seconds I was transformed by the inspiring speech of Shimon Peres, the fireworks and the strains of Shoshana Damari and Arik Einstein, back to the world of joy and national pride.

I'm such a sucker.

Yes we did the picnic thing. Yes, we have flags flying. Yes, we spent the afternoon criticizing Israel. It's part of the shtik.

A few people wrote me about why I haven't commented on the all the poems all over the avenues here. There are big posters stretched across the boulevards and it is really an ideal of mine. But the poems are not whole poems, only sections and I hate that. Putting part of a poem on a poster is like putting only parts of a face in a portrait of a person. Its like the person doesn't really matter, just the poster. And worse than that, the print is so small I can barely read even the part, which is okay because I can't really understand what it is about when I read it. Sorry about that. I would have loved to say something wonderful about Tel Aviv and culture.

Anyone try this site? if you can find my show and order tickets, i would love to hear about it. Or the opposite. I can't figure out how the ordering works -