Everybody's already out of food. I couldn't even get into the parking lot of the supermarket. one single day everything is closed and we get desperate. At last I was allowed in but couldn't find some of the fresh vegetables i was looking for. of course it may have had something to do with the fact that i was on the phone the whole time because it's half a working day and not a whole one. And most of the people i work with are as way behind as I am.

A little announcement: On Friday I'm reading in the Confederation House in Jerusalem at 11:)) a.m.

If you are wondering why so much of this diary is about me - especially lately - it's because i can't write about politics. I just can't.

On the other hand, I have a pretty nice street,

and a nice family 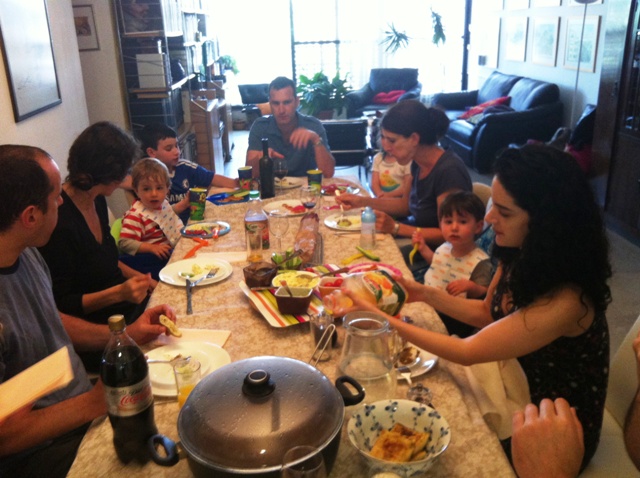 Elections! The air is filled with the possibilities of change! Even though it's not really clear why or when, the sudden excitement is in the air. Even if the cards are shuffled only slightly, there is the hope that a more reasonable government can change things enormously.

A program on tv tonight investigated the lives of the extreme religious - in an effort, I think, to bring some of the warring groups in the country back together. It is very impressive to discover the day to day life of people who live near by but are totaly strangers to most of us.

Roy Yarkoni has a new group - it's more classical than Panic Ensemble and the voice and the cello of Karni Postel are more like the music inside my head, even though the texts aren't mine, and most of them aren't at all what I'd write.

Small picture, but you can see the master control of Roy at the piano and Nir Waxman at the other end of the stage, with Omer Hershman. Not quite perfect as a performance group yet, but on the way.