Coming home from a long discussion on how I see my Israeli identity, i ran into a neighbor - the one who never talks because she is shy - and as usual i try to say something inane to draw her out. "How are you coping with this weather?" I ask, since both of us were sweating. "What can we do," she says, "It's our country." It's what we have. I wanted to hug her, but she would have had a heart attack.

My friend in Sderot has the same sentiment - mixed with a generous portion of anger. Rockets falling on us all the time and we don't react. What did my mother-in-law use to say..."We won't just let them shit on our heads - we're open our mouths!"

Appropos. Recently, the British National Union of Journalists (NUJ) passed a resolution that urges a boycott of Israeli products. So much for journalistic objectivity. If you agree with me that this is outrageous, and haven't entirely given up on the possibility for dialogue, why not sign the protest here.

The student demonstration became a little violent yesterday as the police reacted agressively. I'll have to find out more and report back, but the idea of injured students really is upsetting.

Why is the student situation here different than in the U.S.? Because most of them endanger their lives in the army for a couple of years - so they deserve free education. What about the Arabs, I was asked. They may enter the university two years before the Jewish students but they too deserve as much help as they can get. Because the better educated our entire population is the better chance we have to transcending the terrible problems of the entire society.

I finally got the schedule of poetry readings from the Nissan Festival at Maghrar. I got invited a few weeks ago to read there, but couldn't find out when it was, who was coming. It is now April 29-May 2. And I'm going up there only on May 2 to close the festival. Wish it was during vacation like last year so we could stay for the whole time!

Here's a picture from two years ago. 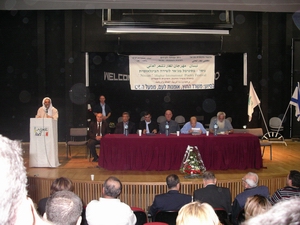 I've got to scan these pictures we had framed at last. Ezi's father Bandi painted them in the thirties, forties, fifties, and we decided last week to frame a series of the water colors of scenes of Palestine for our living room. The aquaduct around Caesarea, the Sea of Galilee, Sderot Ben Zion in Tel Aviv as seen from his window, the shacks on the water by what is now the Hilton. I thought they might be too sentimental, but they are objective, clear. There is no feeling of love for the places, but a sense of composition, and a respect for the peace. He was never at home in this country, especially after his best friend (after whom Ezi was originally named) was killed when he drove over a land mine. But he never went back to that city where he was born and where all his relatives died.

And there are no holy places in Israel - just water, boats, towers, trees, aquaducts, and bauhaus forms. No myths. Only shelter and quiet.

So I've decided to make my day like those paintings - simple compositions - no meaning attached to anything or any place. My inspiration is the local crows - brilliant, unattached, survivors - All I need is luck and no news.

I can't imagine why everyone is going on and on about the Winograd Report. There is nothing in it we didn't know while the war was going on but couldn't do anything about. The Prime Minister was led by the nose by a strangely narrow-thinking military commander, the defense minister didn't know what the hell was going on, etc. etc. I've got to go back and read my diary from last year and see if i ever said anything about that!

No. I guess not. But I knew it. I probably didn't want to encourage the enemy.

Tuesday night at Tmuna - Panic is playing. I am not in it, just my words.