There they are - the knitting circle - sitting around from early in the morning - and you can imagine the tubes they're connected to are some kind of thick new clear plastic wool. And one of them is giving us the Yiddish words for the parts of chemothrapy. Like the lock they stick in the patient first thing he called a "shtutzer." The use of Yiddish lightens the entire atmosphere, even though the room is crowded because the outpatient clinics operate half days during Passover.

Woke up today feeling like I was on a very small boat in the middle of a storm. The room was rocking and to stabilize myself I took out a picture of a few months ago in the Galapagos: 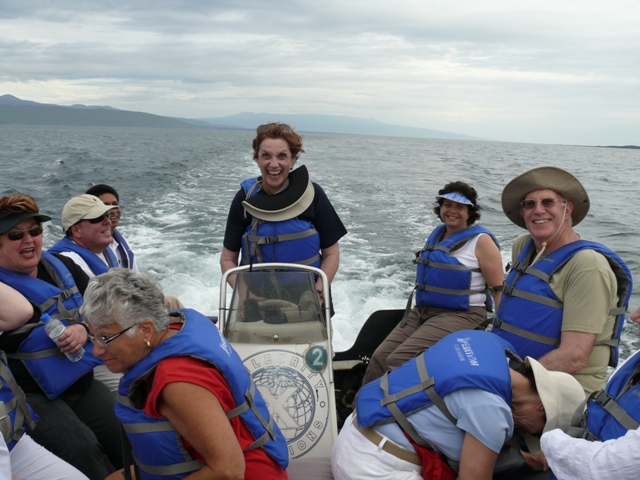 This experience of power, however, did not help me to get the injection for Ezi with speed and ease this morning. Half-day on Passover I say to myself as I open my eyes - and I have four hours to pick up the permission we asked for yesterday and get to the Maccabi pharmacy and get it to the nurse to give it. The permission arrived in the offices of Maccabi at 9:30 and I was there waiting. But the pharmacy only carries the stuff if it is ordered in advance and you have to have the permission before you can order it. And the pharmacy closes at 1. Fortunately we called around and found another Maccabi pharmacy which happened to have one box left, and I managed to make it by 1. And now we're waiting for the nurse.

Think of the alternative - that there was no national health-care set-up, Just one of the six medications he has received in the past three days would have cost us 15,000 shekels, our combined monthly salaries. I'd rather spend the money on medicines than secretaries and do the footwork myself.

Panic Ensemble ReviewPanic has a show on Sunday, the 27th at midnight. On Lilienblum 40. It's free and it's doing new material - my stuff.

"Happy Passover." we say it all the time this week. But twice I've said it automatically in response to someone and then remembered they are Arab and not celebrating the holiday.

I've come down with some inner ear virus and the room keeps spinning so after the doctor (what's a day without a doctor?) I go to bed. Everyone else is touring - Jerusalem is a favorite(even though the temple isn't there any more), but Orit just came back from Tiberias along with thousands of others, and despite the heat, everyone seems to be enjoying themselves. I can watch some of it on tv.

Two guys in their fifties get killed this morning while inspecting Palestinian workers coming to work at the factory, four kassams fall today, three firebombs, and I turn to the BBC to get an update. What do they have to say about the Middle east? That Israel has rejected a cease-fire with Hamas because we don't agree to opening our borders. There's something missing - a little synapse. I thought suddenly to myself - if this is the way the British mind works what luck we are not getting treatment in England. They would probably have given Ezi medication for his rash and ignored his blood tests. 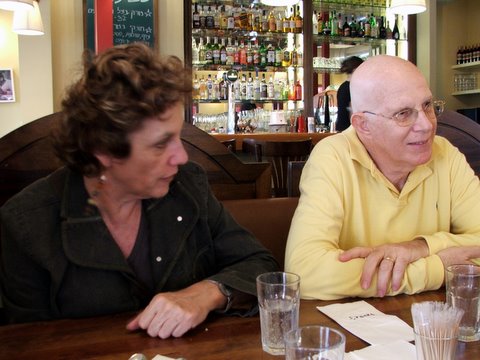 Lisa took this picture of Ezi and me in a brief outing at Pappa's today. Ezi, as you will note, looks much better than I do. Thanks to the treatment at Ichilov and the good food we'd just had.

Mimuna tonight - no mufletas for us this year: We're staying home and freezing tonight. The weather has gone down from the heat wave of 40 degreea to (for me) a frigid 20.