Nothing better than escaping the crowds, especially when all the news programs are blaring out statistics about how many people have visited the national parks, and where the big traffic jams are. Even terrorist incidents and world catastrophes take second place to where everyone has jammed himself in. So we went to a cafe in sleepy Kfar Shmariyahu for lunch with friends. It was lovely, but even lovelier was the walk we had to the beach. 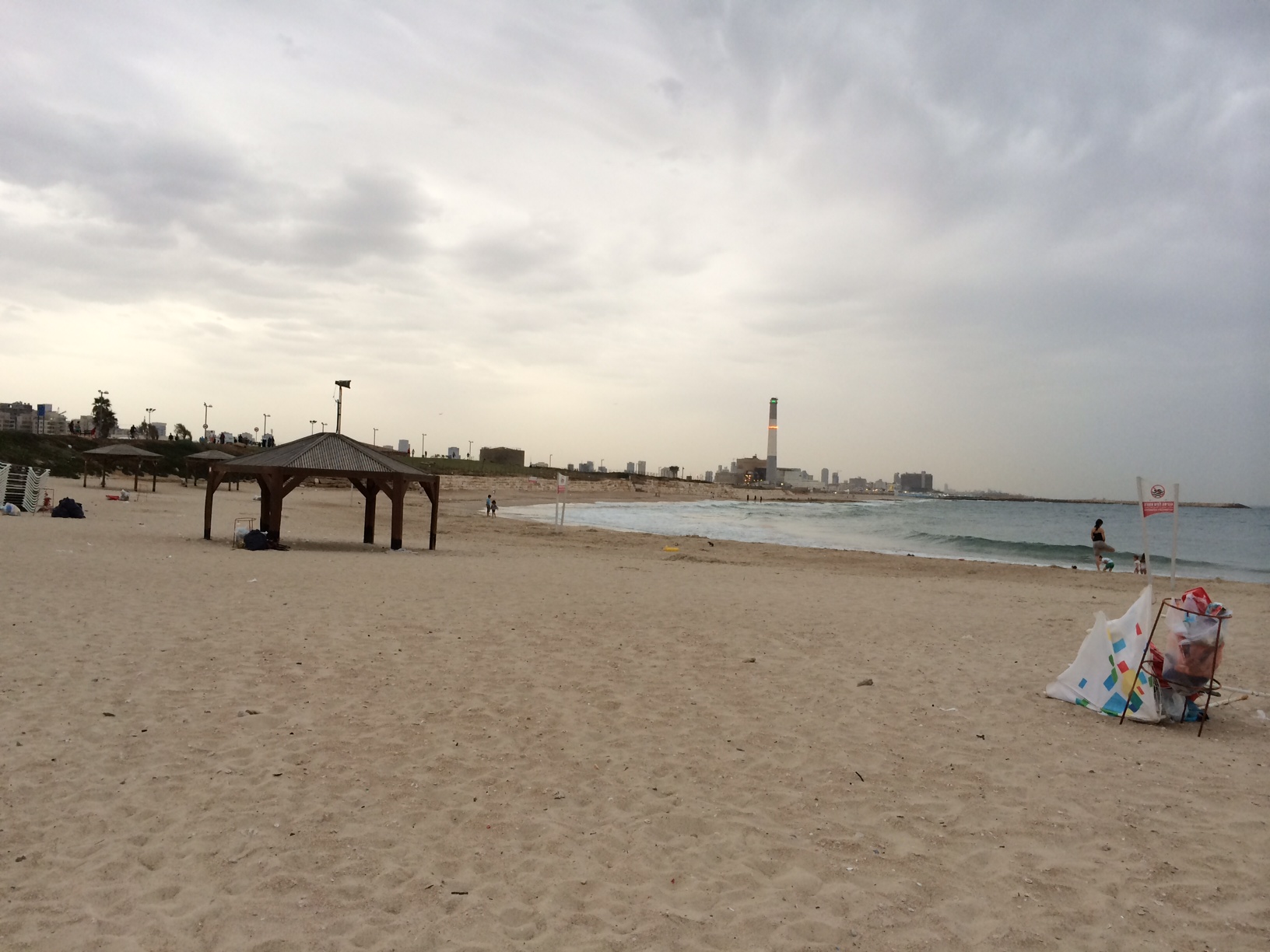 After everyone had left, and the rain was drizzling onto our tehina and into our beer, we braved the weather to see the sunset. 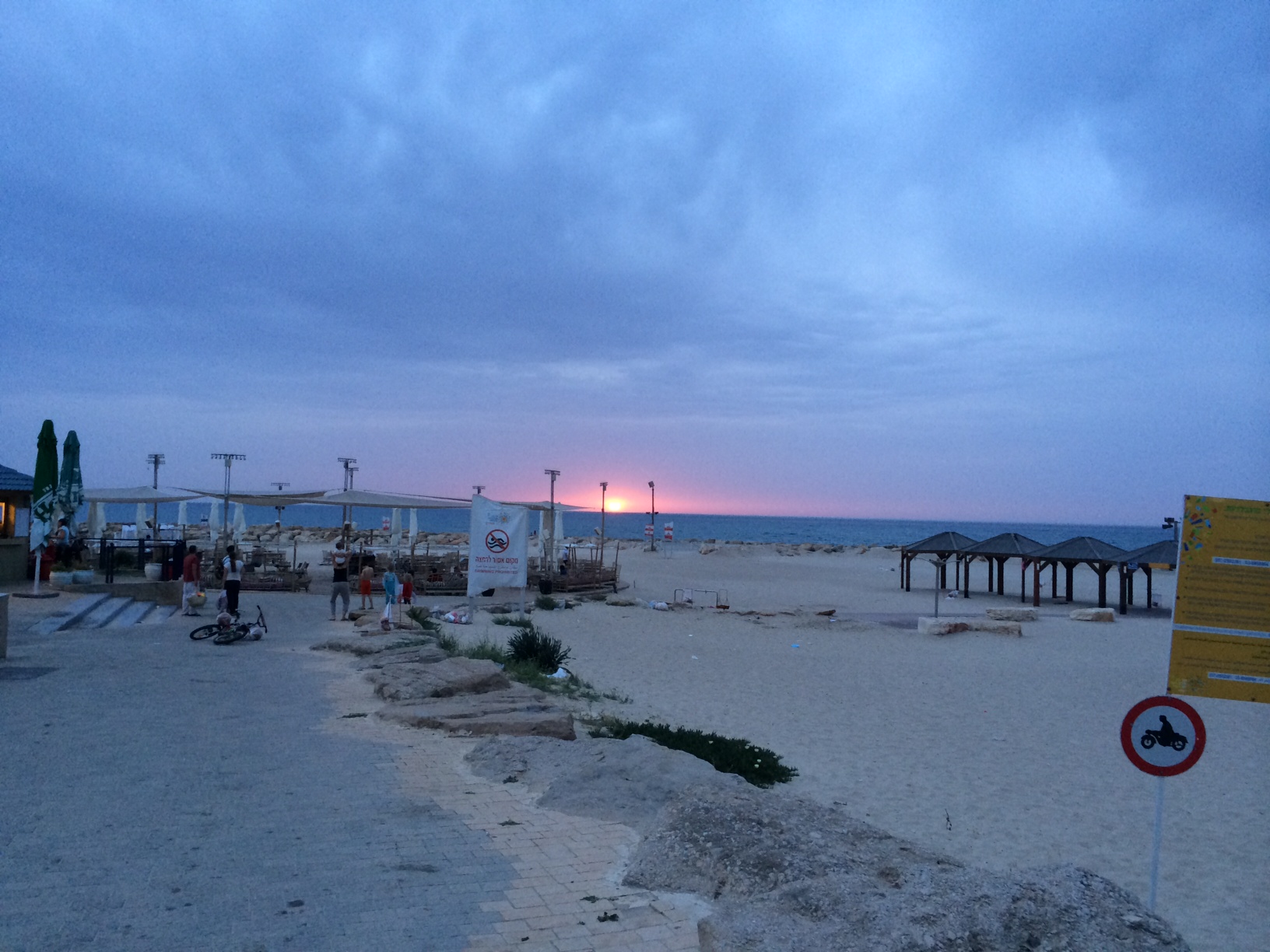 Maybe it's because of the long walk we took yesterday, but today I was limping again, and couldn't keep up with the walking lecture tour Ezi did with Dalia about the buildings Arpad Gut built in Jaffa. The hangars, the theater for the blind, the mayumana theater,.. then the passage building on Jerusalem Avenue, the first reinforced concrete building in Israel. It is as though Jaffo of the 1920s came alive to us, the buildings shooting up like flowers, creating even as they rose: banks, and other institutions that would become the fabric of the country.

This was more of a discovery tour that anything else, matching the photos of the '20s to the buildings of today. the rawness of the tour did not minimize the importance of charting - not only the history of the family - but also the history of the country.

Passover is over and the mimuna begins. Why mimuna? haven't we suffered enough?

Okay, here's a personal take on mimuna. Mimuna is a Moroccan-Jewish holiday the day after Passover. My theory is that the word comes Mamon, meaning wealth, because the result is something like potlatch. There are enormous quantities of very sweet doughy foods that are served to music and dance. Mufletta is one. A flat piece of dough that has risen a bit is fried and then rolled with date honey. it is incredibly delicious. The thing that gets me about this holiday is that it has no real connection with Judaism and just extends an over-long holiday. I don't like the excess of it, even though it is a fun holiday. Moroccans are supposed to open the doors of their house to all visitors to participate in the feast, and the dancing is fun for me when it happens.

Later that day... We didn't go to Mimouna, and the usual coverage of politicians joining in by biting into a moufletta, which probably is what ruined me for the holiday, hasn't aired yet, so we're feeling the wonderful post-Passover mood in a pure manner.

Those of you who asked me where all those muflettas come from when the house has been cleared of hametz, well in Morocco the Muslims would bring flour over and help make the dough. Here, no one asks.

Tonight as we were making cookies, Ezi kept asking me about quantities and timing. It threw me off totally. I go by feeling, smelling, looking, touching and seeing and the moment I start counting and measuring I forget about senses. The cookies came out less amazing then the last few times. And I needed amazing cookies, and so did Ezi. After a day in the hospital where - because of the new rules of protocol I'll bet, they changed the entire staff of the treatment room - all these new nurses were behaving like automatons, VERY slow and nasty automatons, we both came home twisted. Protocol. I do not disagree that hospitals should follow protocol, but they should be looking into patients eyes as well. It used to be that the nurses were nervous and the patients were calm, but now the patients were tearing what was left of their hair and the nurses didn't give a damn. More than one caregiver lost it and protested in loud voices that the situation was unbearable, and at one point a nurse threatened to call security. I don't think this is the right atmosphere for cancer treatment. But protocol was followed.