Somehow it has happened that the conversation keeps turning to post-trauma, to how people were affected by the terrorist attack this time. For most, its hard to touch the subject seriously - but our behavior shows it. Remember the time we decide to sleep away from tel aviv during the gulf war? I am reminded. Remember how scared we were in that traffic jam out of the city that a scud would fall on us? Notice how we avoid any possibility of traffic jams? See how we didn't go anywhere today?

Holocaust Day coming up this week. I know this punk band who have a big show coming up at the end of the week - but rehearsals on Holocaust Day? The lead tells me - can't sing on Holocaust Day. This guys looks, you should excuse the expression, shreklach, has more tattoos on him than 100 Auschwitz graduates - and he can't rehearse on Holocaust day. Something to think about when you think about Israel.

The day my server took too long.

There are some times when experiences are so escapist they are curative. For example, I avoided the news yesterday, played fred astaire and marlene dietrich in my air conditioned cruiser as I motored through Shenkin, and didn't even talk on the phone. To crown this off we went to cinema city and saw 'romance and cigarettes.' this turturro and coen brothers wonder concerns itself with escapism as learned through popular culture which is something i work on in my field of research. In any case, there was much that made me realize how much escapism is needed around here.

I didn't even count the omer.

What drove me to this day of no politics was the obsessive thought that there has to be a way out of the double-bind of hatred - i mean the way we fear terrorism, rockets, the hunger to destroy us -.... oh goodness I lost the whole paragraph because the server went down! didn't save it in time. well you know how the ping-pong of hate works anyway - back and forth until where it becomes a mutual self-fulfilling prophecy. What the Hamas are doing right now certainly seems to fulfill our worst nightmares about them. See Robert Rosenberg on this.

Here's a straight review. We braved the crowds today at the Land of Israel Museum, stood in line with all the other alte kackers and went to the exhibit on the Templers, that German community that came to Palestine at the end of the 19th c, were expelled during WWI and then came back until we got rid of them in '48. (We had a problem with their Nazi loyalties, but even though we exiled them to Australia, we did pay reparations.)

The interest in them was renewed recently because of the urban renewal in Tel Aviv where their buildings were carefully moved (unlike the noble Herzlia High School in the city which was unceremoniously destroyed to make way for skyscrapers a few years back). In any case the Templers contributed a great deal to the education of the local population , as their site in Austrailia tells.

After we had some fun with the Had Gadya statue in the main entrance. I'm grabbing here at the angel of death and Rachel is grabbing at me. 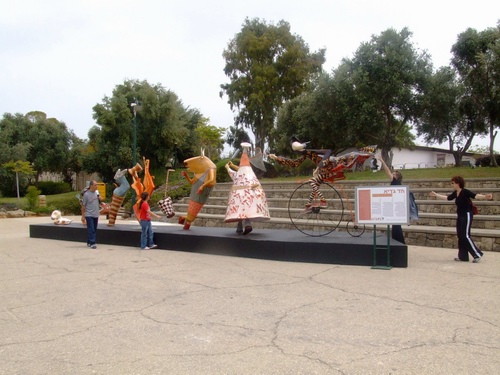 Although her moustache and ears are incredibly crooked, Shusha looked so cute with her new spring haircut I thought I should show it to the guy next door who loves her so much. He's the one who sees her every noon and plays with her for a few minutes while asking me her name. But then I remember that he's been taken away -for good - His Alzheimers' has 'progressed' to the point of no return. His mother, a Holocaust survivor, has suddenly lost her amazing eighty year old grace, and finds it difficult to exchange pleasantries. How will she get through the next two days? Holocaust Day is difficult enough, but when you add the tragedies of life, it is insuperable.

And of course you know that one third of the holocaust survivors in this country live under the poverty level.

The Maghrar Festival will begin on Wednesday this week. I'd go up on the first evening, but hate to miss classes - makes the students lose all sense of sequence. So I'll go the second day. It is something I am really looking forward to - even though with the way the weather is we have no idea if to take winter coats or bathing suits!