Yesterday was the first storm of many we are going to experience this week! For me, with my duvet and laptop I would have loved to stay in bed, but we've scheduled all kinds of things that were mandated in expectation of better weather. So no rest for the weary.

What really bothers me is the way this weather is affecting the victims of Isis in the camps. The human tragedy is enormous, and the weather - which would normally be a blessing in this dry country - must make the situation even more unbearable.

Since so many Israeli citizens found their holiday less pleasurable by the lack of public transportation for the past three days, there was a strong reaction to the photos and films of the members of the government who reinforce these laws touring the country in the automobiles paid for by public funds. So I've signed a petition asking that government-owned cars should be grounded on holidays as well. You might want to sign it as well: here

Anyone want to see The Pracht Inn tonight? I am looking forward to seeing it again - it's opening tonight at Cinema City in Ramat Hasharon. It is based on a story by Aharon Applefeld translated here by Jeffrey Green

When we got home from this film, filled with Yiddish poetry, we went to our seperate desks and silently, simultaneously, automatically, began to do our Arabic lessons. Why?

Once again I enjoyed Pracht Inn, was enthralled by the acting and the post-holocaust situation described by Aharon Applefeld. Once again Ezi thought it was too long. But this time I took a photograph of the music maker, Roy Yarkoni. 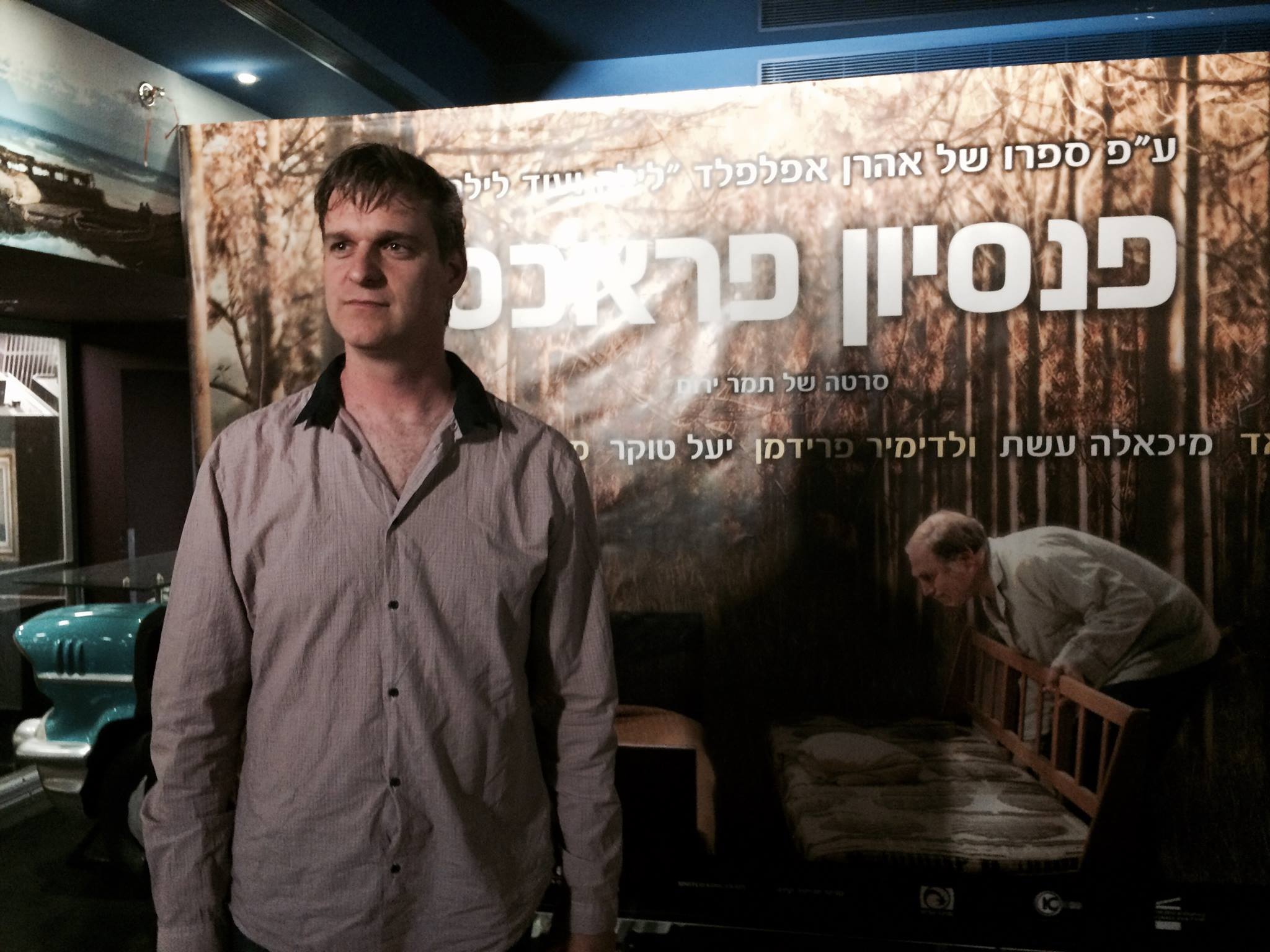 Panic Ensemble will be performing on June 3 in Tel Aviv. I will be in Salerno. Panic Ensemble is performing in Prague on June 20. I will be in Tel Aviv, recovering from Salerno. Maybe maybe maybe I can go to Prague and be back in time to greet the kiddies from abroad who will be arriving two days later. It will be worth it. Let's see how all the treatments I'm doing now work on me.

As someone who only escaped being born in your city
because my mother was so terrified of the Nazis’
repeated beatings of my father
she used a knitting needle in the bathtub,
and washed my brother and me
down the drain,
I feel we have something in common.

We've never actually met.
Even if I had survived then
and dared venture out
on the streets of Danzig
it would have been hard
to have a conversation.

But I’m sure our paths must have crossed
at some point. Perhaps you
were skipping along the cobbled streets
and passed over my father’s blood
from one of his head wounds.


Perhaps that has something to do
with why your Jews
have no faces or feelings
in your books, and you now propose
that 8 million people in israel
should not try to react
when they are told
they will soon disappear.


Certainly for you it must be weird
That we constantly insist
We’re not ready to be wiped off
The earth.


And yet and yet Mr. Grass
there were two people of Danzig
that night before Hitler actually invaded
who saw my parents at the station
with their poor refugee bags,
and gave their seats to them,
sending them off to safety
and with that one gesture
allowed a family to continue
allowed me to be born
in London
on the last night
of the V2 bombs.
I have missed you many times.
Why not make a final courageous effort
And make sure we miss each other again

"At this time of Holocaust Day are there still trains running?" Shawn asks, "Yes," I answer, "But they don't take you home."

I guess I'm living evidence of the paranoia of the second generation.

It's Holocaust Day here. My day began with the tv and a probe on the morning talk show of local Arab dignitiaries about whether they teach the holocaust and so on. The answer was, yes, we teach the holocaust, we teach hebrew. but you don't teach our suffering and don't learn Arabic.

I am progressing more slowly than my fellow students because our teacher explains the grammar as parallel to Hebrew grammar, and I never studied Hebrew grammar. If I did I wasn't paying attention. Nevertheless I am getting better in practice.

And what of the Holocaust, you ask? How will you celebrate this day? With tears, as always. with tears.

The soundtrack of Pracht Inn is here