Two big stories yesterday: the plot to use aids tainted blood in terrorist attacks along with nails, and the plot to assasinate the president of israel in hungary on his trip yesterday.

both plots got deconstructed and somewhat defused. First, The aids-tainted blood attack would not have been effective. Second, when I heard about the assasination attempt of the president I said, "What for?" (i am not alone in finding him ineffective) and then it emerged that there was a general plot to blow up Jews sites in Hungary like the holocaust museum.

Today was my mother's birthday. If she were alive today and heard Bush and Sharon agreeing and then the settlers and the Palestinians disagreeing, she'd have come up with some yiddish expression to negate them all - that german import - KVATCH!

This comes from BY JAMES TARANTO who wrote in yesterday's Wall Street Journal: In Search of Anti-Semitism

The Google search engine has been involved in a bit of a controversy of late. It seems that when you use Google to search the Web for the word Jew, the first site that came up was a vile anti-Semitic outfit called Jew Watch. (Earlier this afternoon, Jew Watch had fallen to second, after the entry for Jew in the Wikipedia online encyclopedia, but as we write, the two pages have switched places again. We're not providing a link to the offending site, because doing so would actually increase the likelihood of Jew Watch regaining the top spot.)

As the New York Times notes, "a Web site calling itself "Remove JewWatch.com from the Google search engine!" is circulating a petition asking Google to remove the site from its listings." No dice, says Google; "it trusts its automated program to rank Web sites accurately."

We hadn't written about this up until now, because although we sympathized with the RemoveJewWatch folks, we found Google's defense plausible. Until, that is, we learned this from the New York Times:

Until February 2003, a user searching for a guide to the English city of Chester would have been presented with "Chester's guide to molesting young girls" as the second entry. After officials from Chester complained, Google removed the site.

There does seem to be something amiss with Google's priorities when the complaints of Jews objecting to anti-Semitism carry less weight than those of "officials from Chester."

Now the writer is very much on the right, and I am very worried about tyhe idea of interfering with chance and directing computer generated searches, but on the other hand, what about that wonderful WMD site? Surely the fact that what you find when you look up "Weapons of Mass Destruction" on google is a parody of the whole concept can't be a computer generated accident? Someone is setting it up, and I don't know if someone isn't setting other searches up.

The other day I was talking to my cousin David about paranoid parents - we remembered one elderly woman who was sure that he came into her house at night and stole her sugar. "How will we know when we become paranoid?" i ask him. "They'll tell you." he answered.

All right, i'm too busy to write. But even the things that are keeping me busy are typical of tel aviv. Thursday night i did a college radio show live (about the disk, rock, alternative, etc), friday morning a radio show on the local equivalent of PBR (reshet A), tonight the rock club barbi, tomorrow beit levick with the yiddishists.

Now all this is escape, right. While I am having a good time in Tel Aviv, i know life is much more complex for 90 per cent of the people around me.

I read the Tayyush site and think that ...

Okay I'm back - i hope i'll be a better observer now that my ego is more free to pay attention to the environment. But first, a few words on Barbi and a bit of the night club scene here. It's been a long time since I've been to a place like Barbi on a Friday night, and I know the usual description of Friday night in Israel is one of peace and family and friends. But Barbi, which is in the garage district of Tel Aviv, on Kibbutz Galuyot (The Ingathering of the Exiles) Street, is one of those places in from the street, almost insignificant from the outside, and grungy looking from the street. And if you stand outside around 11:30 p.m. or so, you will see private busloads of teenagers coming in from the suburbs coming in for the performances. I've often repeated the fact that the whole town of tel aviv is alive on friday night, but i've never actually seen the wholesale importing of youth before.

I can't tell you how our show was, because i was too busy trying to figure out what to do, but I do know that anticipation of "Nekamat Hatraktor" filled the hall and the audience was enthusiatic. Once Avi Belili got on the stage with his raw power and brilliant rhythms, I became more of an observer, and found myself remembering the first times I heard him when he was a very young man.

Some of the people there were from that period. So night life here isn't all about youth.

The theme for the reading tonight at Beit Levick (where even the no smoking signs are in Yiddish) was "the generation gap." We read poems about parents primarily. And bridging the extreme gap created by the creation of the State of Israel - where the 'old' cultures were denied. I enjoyed all the poems but just couldn't get into a debate about the generation gap, not when the other gaps are so much more intrusive.

As we left the evening, with the wishes of 'a gute voch' still in our ears, we hear that Rantisi has been killed - and we vascillate between relief and terror. "dare we go for coffee?" "will there be another attack tonight?" And we hear that whoever the next leader will be, we won 't be informed...

On the way back the radio plays the Grateful Dead, then Abdul el Wahab, then reads a poem of Whitman. How can we bother with the generation gap at this moment?

All right, here's a picture of last night. 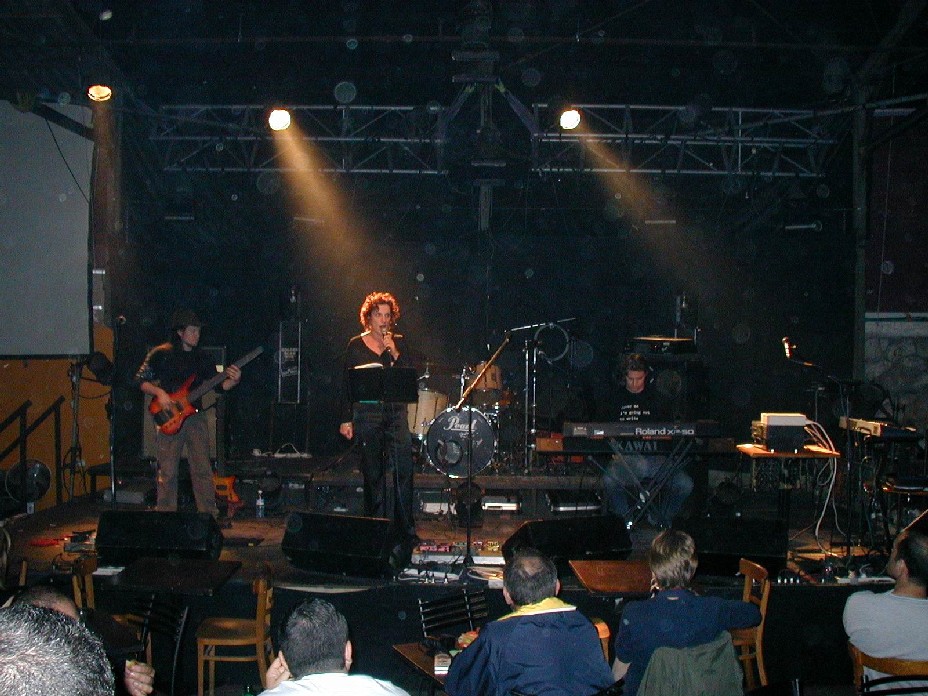 notice too how wasted i look. it's part of the scene.

Say something about Rantisi. Richard sees no alternative, Mark tells me there was no way of bargaining with him, and the truth is - even i didn't think there were too many alternatives. I don't like the use of force. hate the idea of killing leaders, but as we here slide slowly into Holocaust Day, I find my panic level rising, my paranoia, my terror.

John reminds me that he wanted the destruction of israel, and would have gone for genocide. i'm sure he's right, but i know where he's coming from. i also know he would not have been someone to negotiate with. Nevertheless i'm sorry.

We went around this afternoon looking for a place to relax before Holocaust Day kicks in - almost everything closed down by 6. Eventually we discovered, Ramat Aviv G, that hotbed of nouveau bourgouisie, was open until 7. Even the pharmacy closed down. Then we went home and by the time we had dinner the ceremonies on television had started. And everyone was glued to the TV. No cars, no noise, nothing. i took the dog for a walk and it felt like Yom Kippur.

Could it be the Holocaust has even more significance than before? Maybe the death of Rantisi had some effect.