Iĺve lost track of Alaska. Simple as that. Maybe I can reconstruct some of it. We arrived in Ketchikan on the morning of the 10, still dazed from just getting to Vancouver and seeing the Chinese Gardens there and then boarding the ship that lasted for hours and the fire drill and the enormity of the boat and all that. We spent the entire first day exploring the enormous ship ľ 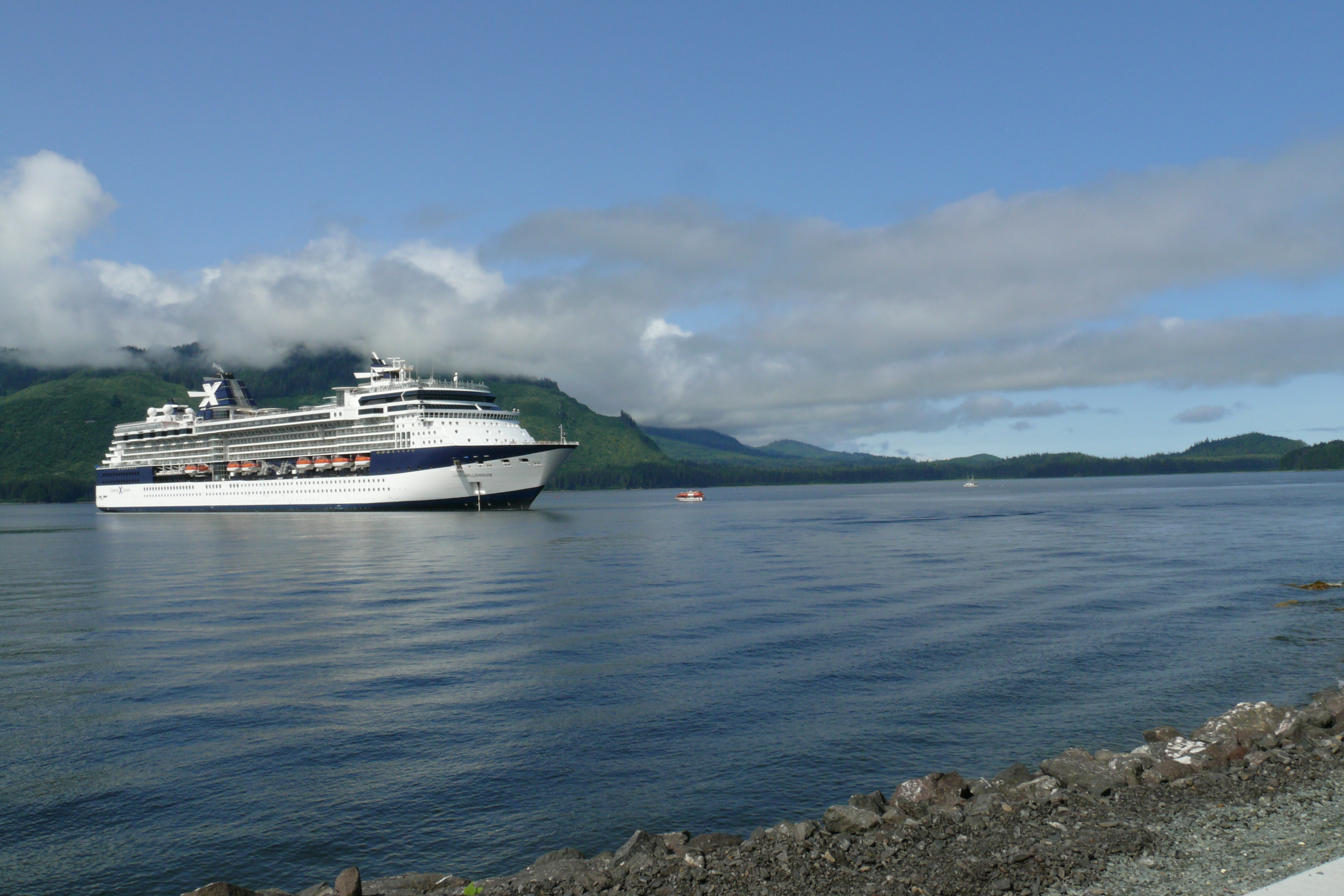 the hot tubs, the sauna, the casino ľ other fun but entirely alien entertainments. The bus for the jeep tour left at 8:30 next morning and then we were suddenly bouncing around the countryside of the Tongass National Forest. The wilderness was overwhelming ľ the rivers and lakes and water ľ and then we arrived at the Harriet Hunt Lake, where we got into these canoes and paddled across the lake for a little snack and a nature walk in the forest. Back in Ketchikan we rested at the Asylum Cafe ľ a place with a great theme and a great name, but not such a nice reception. The ship with its elegance welcomed us back but it was such a contrast to our day. Or was it? Maybe thatĺs why we went for sushi on the top deck instead of the elegant dinner we were expected to eat. The next morning we were up at 6 for a whale watch at 8. Maybe the whales were particularly responsive because the weather was so amazing but it was a real party. I lost count after the first dozen blew in unison, the mothers paraded their calves, the tails flipped wherever we looked.

Iĺd just point my camera on a spot in the water and within moments there would be a picture to take. Ezi took this one but I too have a bunch. This amazing celebration was followed by a day at Icy Point and the town of Hunah, a Tlingit communitythat is inundated with tourists in the summer. The cafe we had lunch at had a salmon melt to die for and a Hoona Hula shake that made my week.

There are just a few hundred people in Hoona, but we found Jews in the cemetery.

What seems to be keeping me walking and exploring Alaska is There are numerous salves for sale around here, but this one works best for me right now. Better than Voltaren I think. Juneau didnĺt do it for me, however. Either itĺs far too commercialized or Iĺm far too tired. Flying over the glaciers was amazing, though.

The Wilderness Express took us to Talkeetna today. The train ride, with its glass ceiling on the top of the double decker car and breakfast in the dining car below, is the ultimate in green luxury. Weĺre staying at the The Wilderness Lodge having spent the day in lovely downtown Talkeetna, 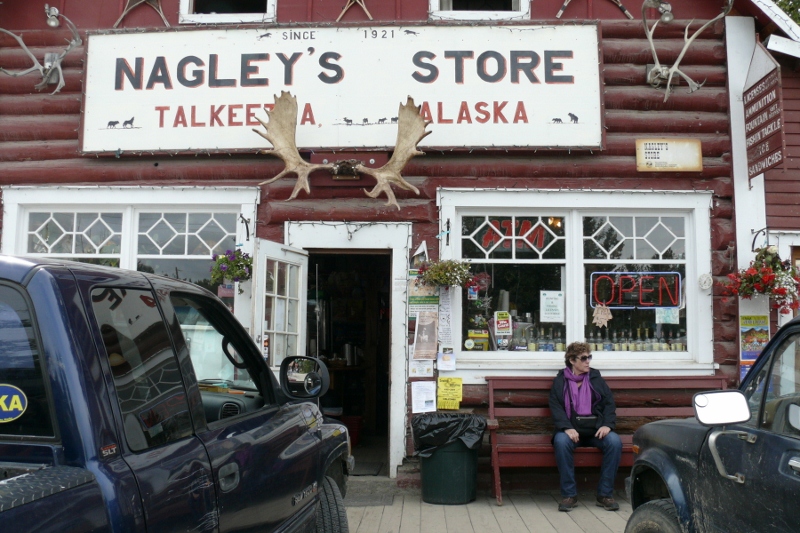 where I spent twice as much as I expected on porcupine quill earrings, but liked the earrings and the vendor Ed so much Iĺm expecting they will be of infinite use to me.

In the afternoon we took a nature hike around some lakes ľ unnamed as yet and referred to as X, Y and Z. It was a three-hour hike in the rain, and we were exhausted after, but were up at 8 to take the train to Denali National Park. Denali is incredibly beautiful, and we were deposited in the hotel with an incredibly wild view. What strikAes us as most strange is the way Alaska is not only half way around the world, but is the antithesis of Israel in almost every way. Most of the people we encounter are only here for the summer, and their home state is written under their name in their name tags but they are full of pride about Alaska, and are always careful to use the word ôWeö when they discuss the country ľ they all feel a part of the environment and the society ľ and can enjoy a joke about Alaska as well. 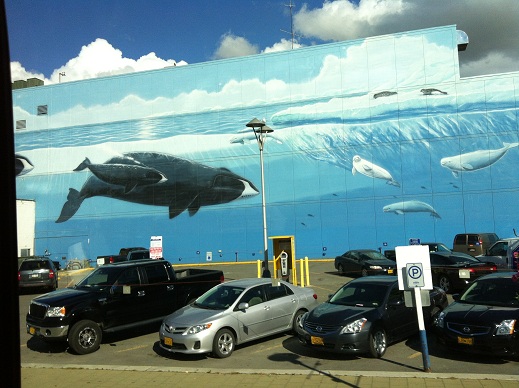 As we rode into Fairbanks yesterday we saw a little black cloud ľ a forest fire, we were told. We get lots of them here. As we left, the sun was setting behind a dark grey covered firmament. 38000 acres we were told, but itĺs on military property and not endangering anyone and on the other side of the river so by Alaskan law theyĺre not doing anything about it. 38,000 acres! Thatĺs ľ what ľ half of Israel! Think about the fuss the fire in the Carmel caused last year ľ think of the animals, the lives, the animals, the birds. I couldnĺt fathom it, and maybe itĺs just that people donĺt like to show their worries around here in front of the tourists, but I donĺt see how all the television channels werenĺt covering it live. Itĺs like saying because it was an act of God ľ lightning ľ itĺs what God wanted. 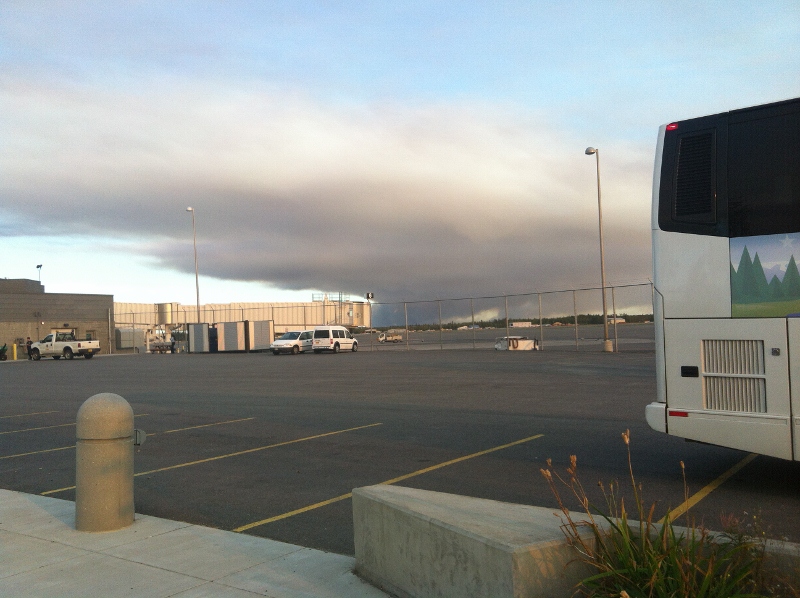 That kind of covers what the essence of Alaska seems to me to be ľ itĺs ecological in the deepest sense of the word ľ leaving things be ľ the vastness of nature makes it clear that the human mind cannot fathom it, can only try to work with it. Forests grow as the glaciers recede, and fireweed grows when the ground is disturbed. Something that grows ľ like Devils Club ľ may look ugly and useless but it can be made into something marvelous. < p>But what of the native americans? What of their lives? The riverboat trip we took yesterday that brought us to an Ĺauthenticĺ village portrayed the subsistence life they led and lead as something noble and successful ľ the hunting methods primitive but highly successful and very wise, the cooking methods difficult and extensive but sustainable. The three college girls who told us the stories of their tribes were charming and presented their speeches well and with humor. But although they are descendants of the Alaska tribes they are far from living a primitive existence and work at performing it in the summers. Of course it is fake. What else could it be? But what is their living now, and what was it then still eludes me. What is courting like? How does the body adjust to the extreme climates of Fairbanks and the variations of daylight hours? How does it affect the social lives of people? What is childbirth like in the north where there are such distances one pilot told me he has often been called to pick up a laboring woman to the hospital and winds up delivering the child himself in the air?

In Israel, I told Mike Edson, with whom I compared notes and who helped me formulate some of the distinctions, I see so many people all the time I open up my window in the morning and ask my neighbor how Iĺm doing. Then I remember all my back trouble and how the orthopedist sent me for an x-ray. Should I bring it back to you, I asked. No, just hang it out your bedroom balcony ľ Iĺll see it. Okay he was just kidding but now I know why heĺs never asked me about what kind of mattress I sleep onů

Itĺs interesting ľ once I tried to figure out a food budget for the two of us and discovered that not a day went by where we werenĺt feeding at least one other person as well. This does not look to be the kind of situation in Alaska. People are much more friendly, and warmly funny, but not intimate.

That riverboat trip ľ I have to go back to that before it entirely escapes my mind. I was incredibly excited about going to a village, about seeing the dogs trained for sledding, about riding a riverboat in itself. But when we reached the dock, we had to go through an enormous giftshop first ľ one that contained everything we had seen before on this trip ľ sweatshirts, jackets, hats, socks, and anything hundreds and hundreds of people ľ either old or Japanese or both. Then it turned out there were two boats and the same crowds were going to visit this village at the same time. 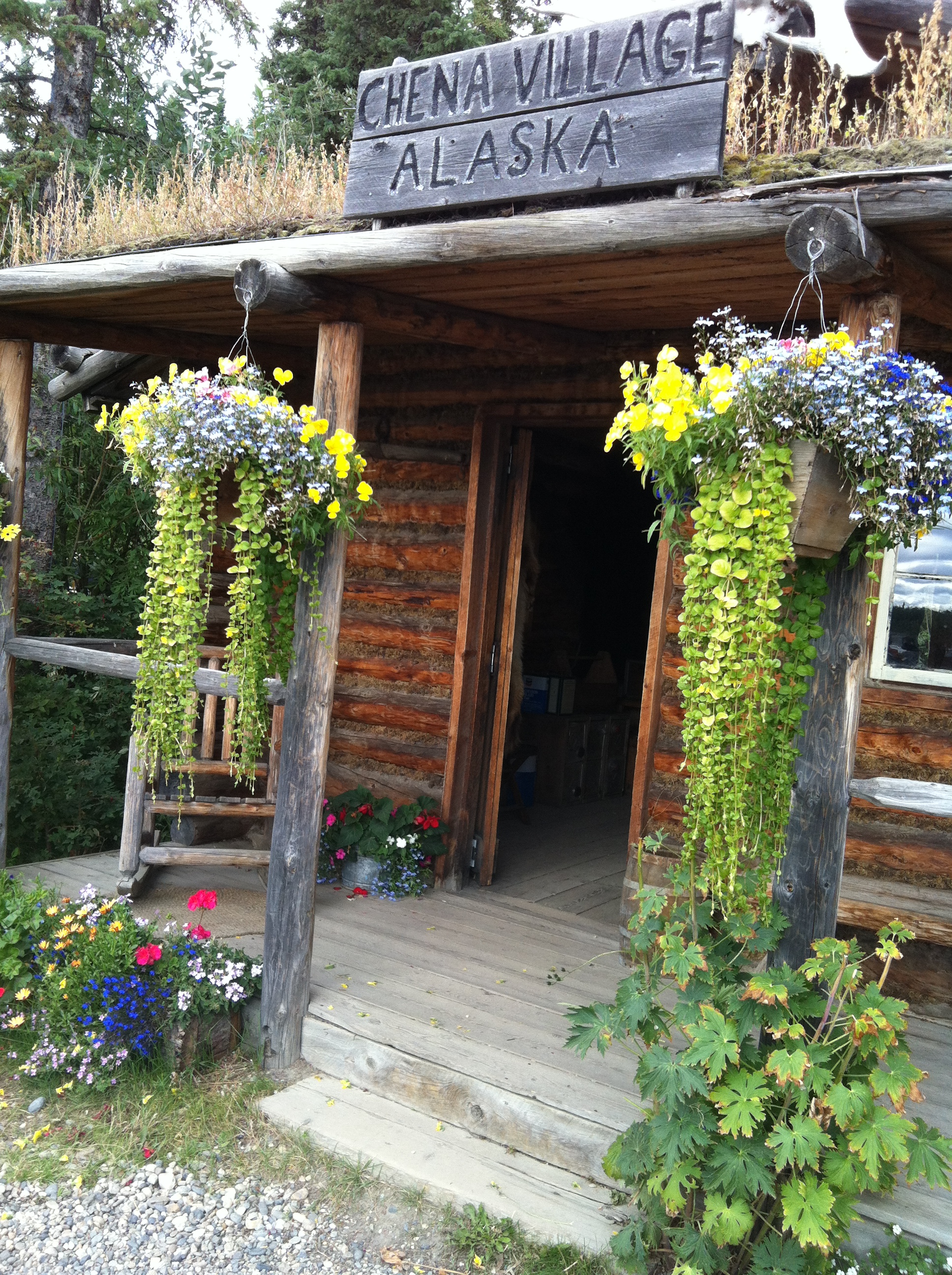 < p>No gift shop I could see in the village, but there was one on the boat ľ with the identical Ĺmade in chinaĺ totem poles and earrings. The paddlewheel was real, however, even though there were none of the navigational complications Mark Twain talked about but problems unique to the Nenana River. Itĺs not only the tides but the glacier silt. The recent drought has caused the water to recede and islands suddenly to appear But since they were only going about half a mile up river and the water is shallow enough for a person to stand up in, I donĺt think there would have been much of a problem if we got stuck.

There were supposed to be free doughnuts on board but since we had just eaten at Big Daddyĺs we werenĺt in the big rush everyone else seemed to be in and by the time we got to the doughnut lady, they were gone. Pushy people.

Big Daddyĺs ľ now that was as authentic as any place I can think of in Fairbanks. The overt recognition to the numerous troops almost anonymously appearing ubiquitously in the city was a tribute I felt needed. 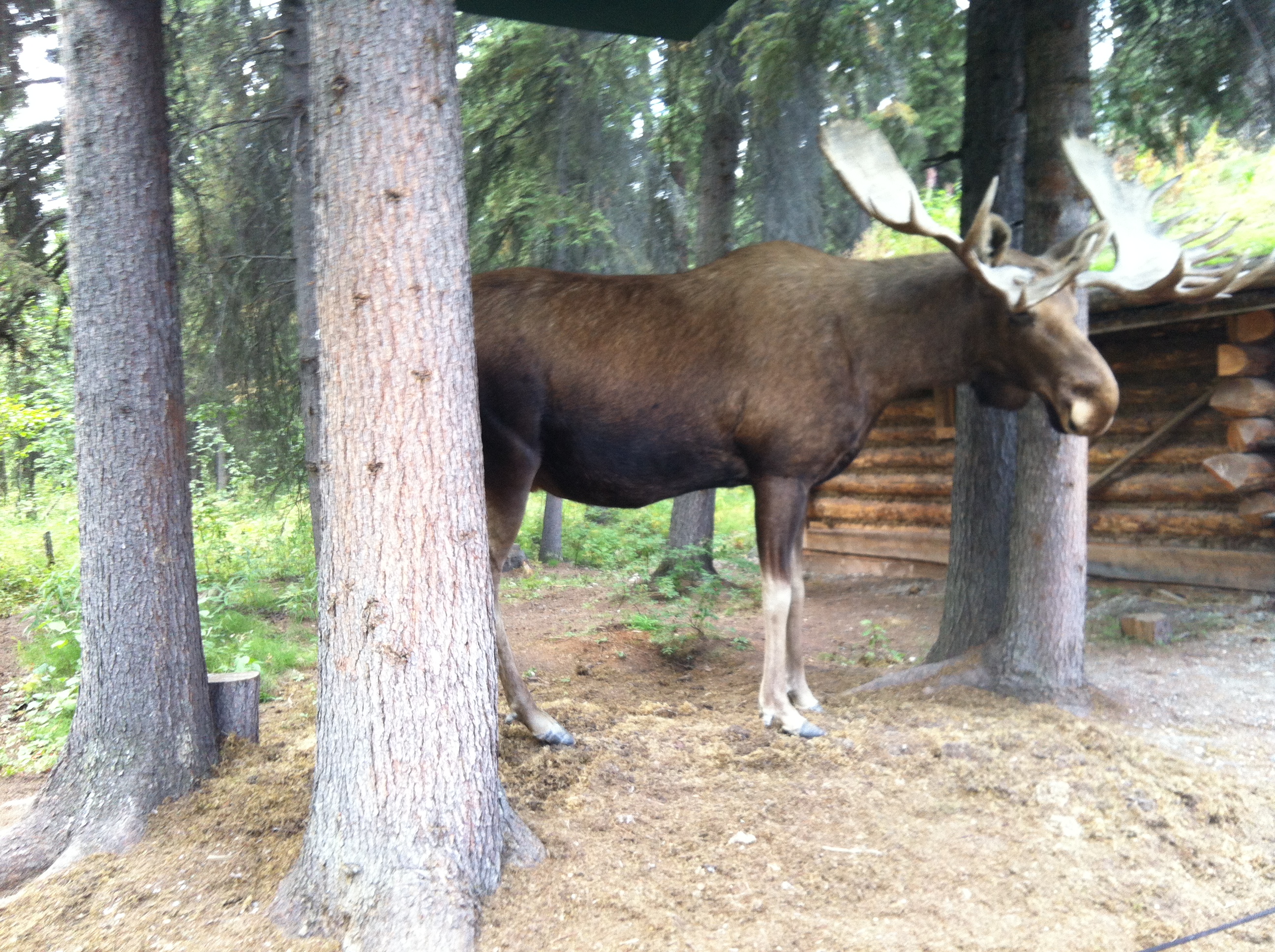 The food was lip-smacking, knee-slapping good too. We ate a whole bunch of different kinds of meats, but now itĺs time to leave.