Even though my memory is fading, there were two really great things we did on the holiday that I doubt I will forget. The first was Louise, a neighborhood healthy cafe where I had a cheese kadayif that was wonderful. And I followed it with tapioca pudding which was almost as good I the kind I make. My kind of comfort food.

The second was a concert at a friend's home - a young cellist and a pianist performing before 20 enthusiastic people in a small salon. Most of the pieces were wonderful, familiar but intensified by the intimacy of the little space. Ernest Bloch's Schelomo was unknown to me, however, and I was enthralled. 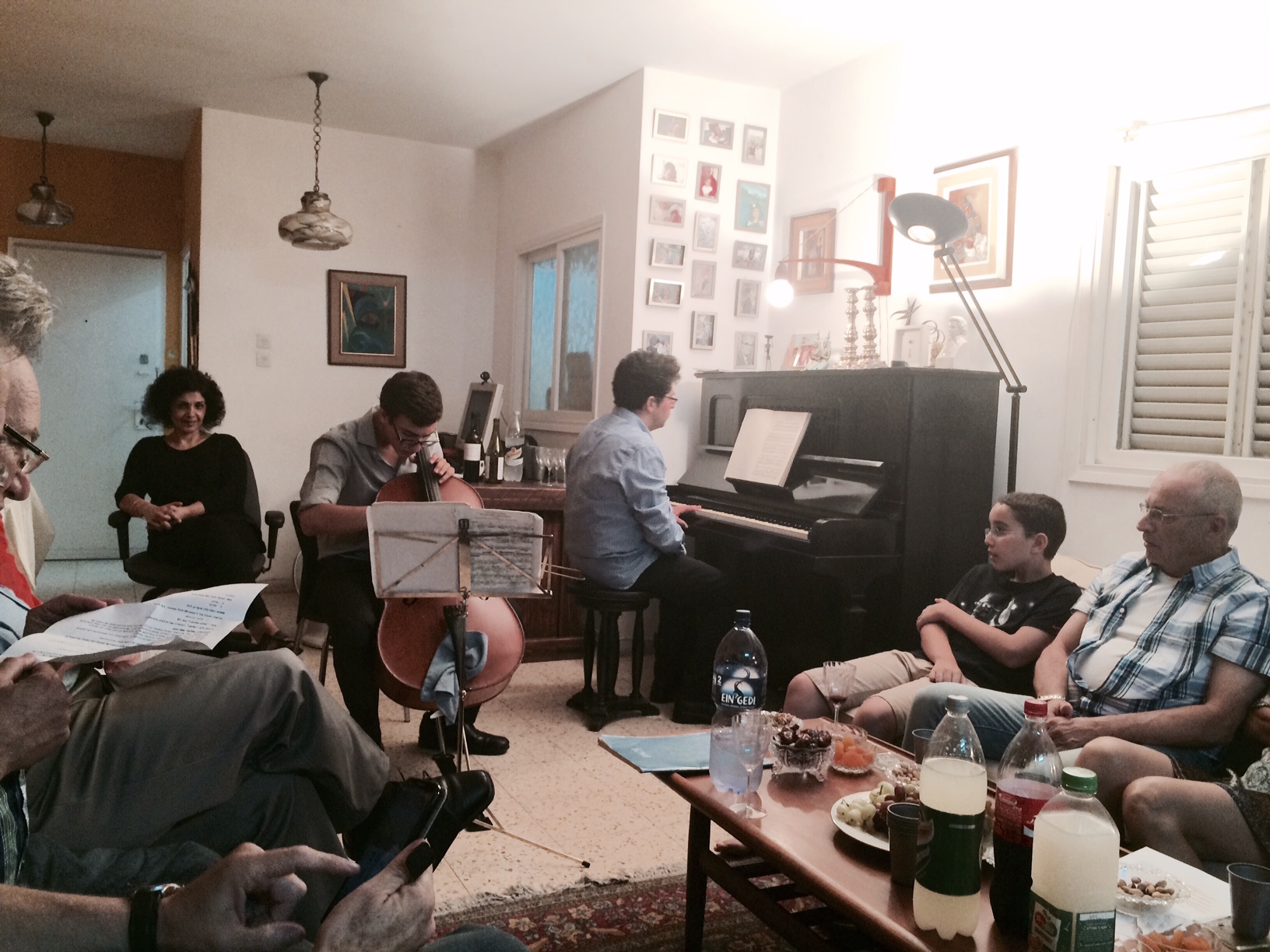 All week people have been talking about the high cost of living in Israel, and using the price of the Israeli chocolate pudding "Milky" - as an example. The price is five times higher in Israel than in Berlin, and this is a reason that so many want to move to Berlin. This is behind the cartoon in Ha'aretz yesterday, where the father threatens his son, "Eat all your pudding or the Gestapo will get you." I laughed and then shuddered.

Look, it's scary here. We've got Da'ash and Hizballah on the north and Hamas on the south. We've got the threat of Iran and an impossible government. We've got the heavy past of the holocaust and few prospects of peace. Why should anyone stay here? Yet I believe in it .

At the film festival in Haifa we watched "The Pracht Inn," a film from Aharon Applefeld's story about the the post-holocaust longing for Yiddish and the world that was erased. Poems by Celia Dropkin, Yacob Glatstein, and most of all Avraham Sutzkever broke my heart. And the music, the music by Roy Yarkoni - wow! Okay, the film is not focussed, but, as the director Tamar Yarom said, in a sense that is the point. The whole idea of the disappearance of a ripe and full language is not logical, the holocaust is not logical, and the attempt to preserve Yiddish isn't logical. I loved the movie, even if it was a little clumsily cut and it was hard to follow.

I found Dropkin's yiddish poem on the her online book, In Heise Vint in the Yiddish Book Center. There is a new book of translations but I haven't found it yet, so i don't know if there is translation of this in English, so I'll just tell you - it's a poem about lost love, but it comes off the film as a poem sung by "Yiddish," now a ghost of what she once was, asking only for a little joy. This is also the subject of many of my quarrels and loves of Yiddish in Leyvick House. Leyvick House is the home for many Yiddish writers who are old, and a very few people like me who are reluctant to let it go. But perhaps the Yiddish Center in Amherst can save something of it.

The other day we were having lunch with a friend who was visiting from the U.S., an Israeli who left to go to school in long before in the last century and stayed on for a doctorate, then a plum job, then a local wife, etc. Anyway he looked around the busy restaurant and noted that Tel Aviv didn't suffer from the war. It was just as the billions of dollars were being given to Gaza for rehabilitation. I wanted to stand up and turn the table over and tell him to look at all the stores that closed down, all the tourists that cancelled their trips here this summer, all the traumas... I wanted to point out the cleaner in the restaurant who didn't talk for a month after he came back from Gaza, and the resolution of a number of the diners to leave the country as soon as they wrap up their debts here. I wanted to tell him about the grief we feel about our government and our inability to alter the situation because our heads are too deep into solving our every day existential lives. But these things are too hard to say and it took me two or three days to express it.