As I was leaving the the Ambassador's house after a talk by Frank McCourt, I turned to the woman descending the stairs with me and said, "wasn't that wonderful?" "Yes," she said, in an Arabic accent, "He lived through so much!" "Not so much," I said, "he just knew how to tell about the ordinary, the banal." "And he holds no bitterness," she added, and both of us immediately made the connection - only when you hold no bitterness can you move ahead. I don't remember which one of us said it first, but we began to finish each other's sentences, making the obvious connections to our own situation.

And then she got into her car and I got into mine.

I have no idea who she is, except that i seem to remember hearing her tell someone she works for Ha'aretz.

Now I spoke to another Arab woman at the reception - a woman I know has a very difficult life, whose town does not like her intellectualization and fraternization, and who do not like to help her. I could see then that she would love to be in Frank McCourt's situation - beyond bitterness - but her situation is one of daily pain. It's much harder when you're facing that daily challenge.

On a personal note - I caught a glimpse of the video Ezi made of our 'performance' last night. My face is exactly that of a photograph of me when I was a flower girl at the age of 4. I had a peach silk dress with a pink slip, my hair was in ringlets, i was wearing lipstick, carrying flowers, and the smile was one of total self satisfaction. The only difference is that I was now gussied up like a rock star and am 54-5 years older. it is quite funny.

About the fence: I have a lot of offline correspondence about it, and many friends make convincing arguments about why it has to be there, but I can't get myself to approve the fence as it is. I can't totally approve the protests either - for the same reason - they are oversimplifications. However, the shooting of protestors is not a complex issue, and should be prevented in the future. You can write a fax to Ruth Bar, assistant to the minister of defence 03-6962757 about it.

Mel Gibson. For years I've been hearing about his antisemitic father, and now this. The Best comments I've heard on this are from John Williams, who says on his site,here:

I am reminded of the old joke.
A Jew was walking down the street when he was beaten up by a stranger. The battered and bewildered Jew asked why he'd been attacked and the assailant replied,
"The Jews killed Christ!"
"For God's sake that was two thousand years ago!"
"Maybe so, but I only found out today!"

If a single Jew is harmed because of this film then the guilt belongs to the Gibson family.

Actually I myself was accused of killing Christ on a few occasions by the Catholic neighbors of my long-ago youth. There were children who told me they weren't allowed to play with me because I had murdered the savior.

Went back to see the Korman exhibit again. With so many possibilities for art in Tel Aviv I had to return to Korman, to see the old pictures of Tel Aviv in the 20's, the innocence and the enthusiasm of a new world. This time I paid more attention to the audiences in the lectures and performances in "Beit Ha'am," the people's outdoor lecture area on the corner of Ben Yehuda and Sholom Aleichem Streets. Jasha Heifetz playing his violin on a covered stage while thousands stood watching, enthralled. Lecturers talking to silent school children sitting cross-legged. Writers standing with their finger pointing to the sky, making a point to the crowd.

Oh, those were the days, the people around me sighed. And all i could think about was how to get to sit down and put my feet up on a coffee table - maybe watch at little educational tv.

But the photographs continue to fascinate in their naked embrace of life in tel aviv in the 20's. 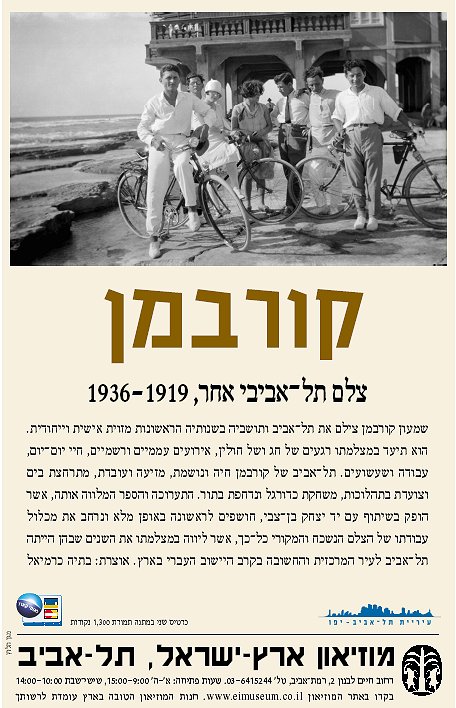 My entry for yesterday got erased - maybe on purpose. I was kvetching about the airport here and what a mess it was and how long i had to wait for Oren to come out yesterday. But after a few hours sleep it suddenly doesn't look so bad - and the fact that there are always hoards of people waiting for other people is kind of nice - hamulot.

Some of youhave asked for an update about Hilit Yeshurun, but I don't know any more than is on the news. And nothing has been emerging. She is home and she's not talking. And the translator who is in litigation with her was dismissed as a subject. So I go back to my original theory that there is a literary conflict with a political tinge to it. And I wish her well.

But I do have news. As you know, there are no equestrian statues in Tel Aviv. I am pretty sure there are no representational figures in the urban sculptures here at all. After all, there is a commandment against graven images. But it makes it difficult to create heroes or a sense of the history of a people.

So now an equestrian stature of Meir Dizengoff is scheduled to appear within two months opposite his home in Shderot Rothchild. In a suit, holding an umbrella, with a hat.

And Ben Gurion reading the declaration of independence!

wow! To me there is a great significance in this, the giving of ideals a local habitation and body.

And the fact that it won't be a great sculptor, but Frank Meiser, the homey maker of small bronze and steel images and scenes, also warms my heart. You can see his work here . I think it has great presence.

Review of last week's opening for the disk (and book) here

Okay, so there was a terror alert. So we changed our plans and had dinner at home - but then before we checked to see it was over, we went to see "Lost in Translation." Fabulous film.

And there were tickets.

And Oren sang in a club in Yaffo. And Orit was out.

There were 56 terrorist alerts today alone, and the one that warned people not to go the the central bus station today was the most immediate and specific.